Good day/evening, so I just got roon on Black Friday. Even though I am rarely using headphones these days I purchased two streamers, a Pi2AES for my media/theater room and Volumio Primo for my living room.

Really didn’t fully understand how this works, so I set up my pc as a roon core. However when I am in my living room I do not have my pc on, nor do I leave it on all the time.

So when I try to use roon when the PC is off you are not able to, I guess the roon core has to remain on for it to function. Which is where my problem is, I am guessing I have to build or buy a dedicated active roon core.

Is this all accurate? If I want to use roon the roon core has to be powered on? No way to get around this?

I will check out PaisleyUnderground’s roon forum link. Is there anyway to get this solved without spending a lot of money?

Yes, you need to have the ROON core active in order to use it. With an active core, I can run the music transport to any attached DAC, to my SONOS, to computers and android or I-devices on my local net. For me, the database is at least as important as the music transport. It’s particularly nice when reading the Jazz History book our group is reading. I used to run the ROON core on a Mac mini that I rarely turned off. Now I run it on my MacBook Pro.

Having it on the pro lets me take the core with me, and I can read the Jazz History on Kindle, search performances in the database and listen either with headphones directly (the MacBook Pro internal DAC isn’t bad) or via an outboard DAC.

I had seriously considered running a dedicated core, but this solution works better for me. I think the fully dedicated core appeals to people who want to do a minimum of configuring.

So I maybe confusing the roon core with a music server. But does it matter if the roon core is a noisy gaming pc? My friend gave me one his old crappy computers or should be a minimal design.

Not sure if noise travels over the network or if the core is even transmitting the music, but my current PC is probably far more noisy and I use it. Honestly have had no issues I am aware of or that it’s creating. Not sure how the core functions

That’s beyond my level of expertise, and probably depends on what kind of noisy. Some people keep their core machines in distant rooms or closets because of physical noise. I have always run my cores or physically quiet machines - Mac mini or MacBook Pro. I have a much noisier old gamer laptop that I would never want to use if I was going to attach a DAC to that beast. But It would probably work just fine if I was running to endpoints physically distant.

Rob Watts says to feed his DACs with a basic signal and let the DAC do the upsampling. Do you feel that the Qutest sounds better in your setup when fed an already upsampled signal? I am doing Roon (no changes other than its 16 to 64 bit float) into HQP into Qutest. Obviously my listening will make my decision, but I was wondering what you had come up with, and what HQP settings you are using. 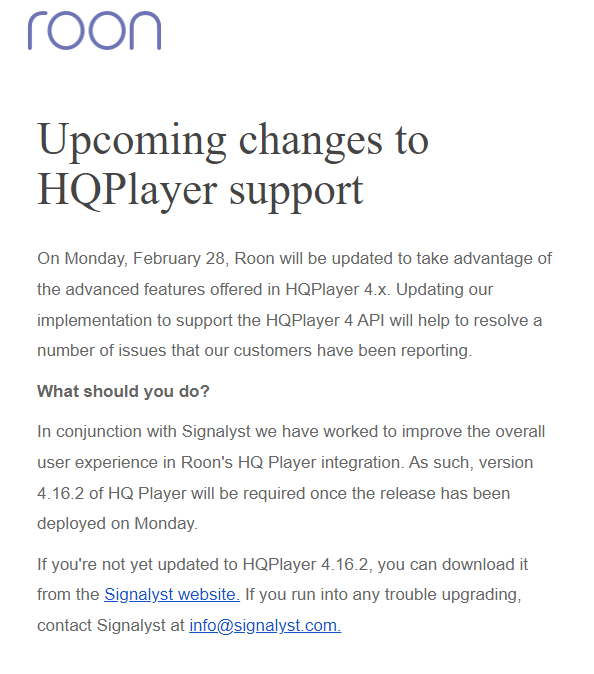 Did a quick write-up on my Roon Arc experience so far: 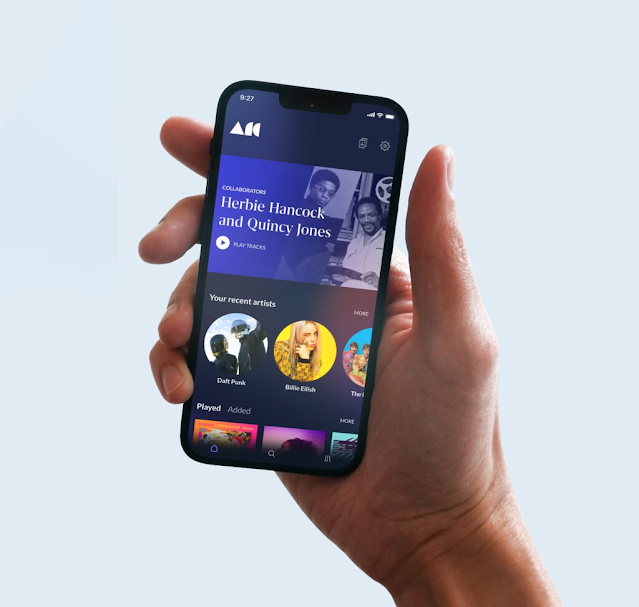 The popular music library and streaming server software, Roon, had a major 2.0 revision released this week with their new game changing feature called Roon Arc. With this update, comes a new app for Android and iOS and allows users to take the Roon experience away from home by allowing users to connect to their Roon core server at home while out of the local network. I’ll discuss my initial experience with the update so far in this short write-up, just a day or so after its release.

First off, I use Roon a lot at home. It is my primary music player and music streaming service. I tie it to both my local library of music with thousands and thousands of audio I’ve collected over the years, along with streaming services connections to Tidal and Qobuz. This seamless integration of all three, along with Roon’s user interface and recommendations algorithm have made this a worthwhile investment after the sticker shock price tag for a “music player.”

One of the little things I have wished Roon had was a method to use it away from home since I spend a lot of my week at work in the office, or on the road in my car, or on travel, or just working at a coffee shop or visiting a friend and enjoying music. Roon’s 2.0 update has brought this wishlist item to production and it works great!

There’s first a server update that was completed rather quickly, along with a new app on Google Play Store and the Apple App Store called Roon Arc. The Roon Arc app looks fairly similar to Roon Remote, except it only allows you to control the music playback on the device itself, and not other devices at home. It also has limited settings for the device and server, and doesn’t let you change major server settings like you can on Roon Remote. That’s fine, because now I can use the Android app as an Android music player, and not some half-server remote administrative tool and half-music player software that always felt a little mediocre on both ends.

I tested first on my Samsung Galaxy S21 android phone on a T-Mobile 5G connection and it worked perfectly at home, in my car, and walking outside. I was able to get seamless uninterrupted connection, with minimal buffer time. It was about 1 second from pressing Play to actual music playing on music files stored on my Roon Core, and about 2 seconds for music streaming through Qobuz or Tidal. Once started, the buffer went into effect, and it was basically seamless afterward. I had no connection issues at all, and everything worked as expected.

I then tried using it on my digital audio player: an iBasso DX240 Android-based player. It also worked mostly flawlessly. I did run into an issue where it the app would crash after I press play every once in a while, but when it worked, it was seamless and uninterrupted. The app crashing is a bit of annoyance, and I’m wondering if it really has to do with the iBasso’s audio implementation where it tries to upscale or divert from the Android Audio stack or if its something else. The app works flawlessly on my phone, so this seems to be more of my player’s issue.

I used the iBasso both tethered to my Samsung T-Mobile 5G connection, as well as at work today through my office guest network and everything was smooth and simple. I am pretty thrilled to finally get the biggest wishlist item for music playback I’ve had the past few years – which was a simple, integrated music library the combines my local music and my streaming services all in one interface.

The future is here. This is a game changer for Roon and makes it worth the steep price tag for me.

Thank you. I have not had the occasion to do the upgrade but now that you pointed it out I certainly will.

At work I use the native Qobuz interface for much of my music and will really enjoy having the precision of ROON. Even though I use iPad to iFi zen blue over BT5 to my amp and speakers. I’ll like the EQ options in addition to my Lokius.

I forgot to point out that I use Comcast Gigabit internet at home, so that may help things out a bit. That said, an online audio friend of mine said he has Roon Arc working well from Australia, with his roon server at home in Singapore.

That certainly is a great feature addition to Roon.

Does it work with Android Auto?

(i.e: does it allow you to use Roon as the player in AA?)

It’s working for me in the office now, but I don’t see the expected device EQ in settings. Have an iPad Pro M chip. I like having access to my home library.

I would anticipate an increase in Roon Labs members. Roon to Go 2.0 has been actively discussed since the initial release.

It’s yet to be seen if the Roon Lifetime Membership continues, since a long term income stream should be more profitable. I’ve been a Lifer since April 2016. I hope they don’t sell the business to one of the big streamers like Apple Music. Roon focus on the firmware and its business management has been real good for home listening (and now mobile).

Yes it does.
Been using it in the car the past couple days. My only complaint is there is no dashboard display or steering wheel controls.

If I unplug my USB and let the phone connect by
Bluetooth, I get a display on my entertainment system, and steering wheel controls work again.
However, the USB connection sounds much better.

I have been using Roon Arc since it was announced. Easy and quick upgrade to Roon 2.0 and easy and quick download of Roon Arc to my iPhone. The interface is easy to learn, and for me, the SQ was excellent. Very pleased with this new app.

Just upgraded and ARC is working great. No issues using with VPN once port-forwarding turned on. Impressed with how snappy and responsive the controls are. It would be nice if they could consolidate the Roon Remote and Roon ARC apps. I like the subtle UI changes of ARC better. Hopefully the UI/UX trickles down into the desktop app as well.

I am new to Roon (my trial ends in 2 days). Am I correct that there is no option to download files onto a mobile device through Roon?

I feel like the ability to stream from YOUR library outside the home is awesome and a step in the right direction, but I would love to also be able to download my files and play them offline when on a plane or any area with shit service (going to Mexico soon and am wondering how this might work).

In the meantime, I can download on my iPhone or iPad with the Tidal app and play through a dongle DAC, but would rather use Roon. 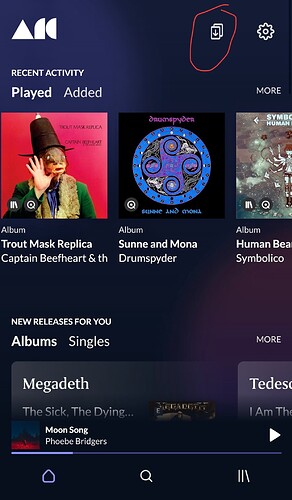 Sah-weet!! That’s awesome! I may just buy a lifetime sub then (while they still offer one).

Thanks for the reply!

The next wishlist is, of course, to have their desktop clients work with Arc. I’m a little surprised this wasn’t introduced at launch since people use laptops on the go or at work often.