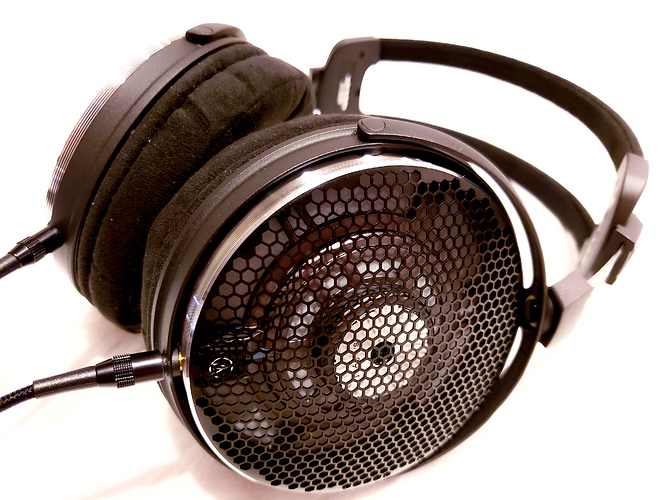 I first came across the Audio-Technica ATH-ADX5000 at CES last year. I heard a ton of headphones there, and since then, but the ADX had always been the one headphone that my thoughts would wander back to. I think a year is long enough to mull something over. I took the plunge.

Design
The first thing you notice when you’re done peeling off all the many layers of high quality packaging and finally get the brown suitcase open is that the ADX doesn’t look like a TOTL headphone. The cups are too thin, the wire headband looks like it’s missing its leather suspension strap, and besides the polished metal cup ring, there is nothing to let anyone know how much money you spent on this headphone. There’s no burnished leather or rich mahogany. There’s no carbon fiber or shiny gorilla glass. Even the company logo is hidden away underneath the stamped metal honeycomb grill.

With the ADX, A-T took what you think of a summit-fi headphone and then stripped off all the unnecessary bits. It’s a Formula 1 car compared to the Focal Veyron and Sennheiser 911. It’s the perfect example of form following function. And, it’s unbelievably beautiful.

Handling
When you pluck the ADX out of the satin-lined padding of its case, you notice its weight, or lack thereof to be more precise. At only 270g, it is the lightest flagship headphone on the market by some fairly wide margins. It’s a whopping 45% lighter than the 490g Focal Utopia. The ADX is lighter than its closest competitor, the Ether 2, by 7%.

What you initially mistook as a wire headband is actually thin strips of springy metal over foam padding, all wrapped in soft Alcantara. Having 2 thin headband straps actually makes more sense than having a single large one since weight is distributed to 2 points of contact instead of 1.

The headband exerts moderate to moderate-heavy clamping pressure on your oversized dome, but the clamp pressure is comfortably distributed by the cushy earpads, once again covered in soft Alcantara. There’s a surprising amount of space within the thin-looking cups, and your ears are completely free from touching the pads or the fabric covering the driver.

The combination of ultra light weight, roomy cups, and lack of any hotspots make the ADX the most comfortable flagship headphone you’ve ever worn. You can definitely wear it All Day. But do you want to?

Performance
The ADX sports a 420 ohm impedance, but have no fear, its sensitivity is 100db/mW. This means that you can plug it into just about anything without worrying about impedance mismatches or power requirements. You plug it into your LG V40 and immediately turn the volume down to 30. If only the cable wasn’t 10 feet long, with the split at your navel, it might make an awesome BT headphone paired with the ES100.

You fire up your usual test songs and immediately note how much energy there is in the treble. It gives the ADX a sense of incredible detail and airyness, but you wonder if it’s actual resolution or just a trick of the tuning. I mean, the drivers are coated in tungsten. The same dense and heavy tungsten that you chose for your wedding band because you wanted it to weigh your entire hand down as a constant reminder not to do anything stupid and fuck it all up. How fast can a driver be when it’s coated in this stuff?

But that ring also looks exactly the same as when you first put it on all those years ago, just like your relationship with your wife, because tungsten is also incredibly stiff and strong. It’s what you use when you make tools to punch through steel. You want stiffness in a driver to combat distortion.

So, you do some quick and dirty EQ to tone down the treble and add a touch of subbass to check. Yup. Resolution is still amazing in the treble and mids. Bass seems slow compared to the Utopia. So you shut off EQ to further explore the stock ADX sound.

Treble and mids are definitely the ADX’s strong point. It even makes somewhat poorly recorded songs sound more dynamic and full. Vocals, especially female, take center stage and you can hear every nuance, rasp, and whisper. However, it’s also less revealing of distortion in the recording than the Utopia or LCDi4 in tracks like Bassically -Tei Shi and Love Lockdown - Kanye. The distortion in these tracks are from clipping in the basslines but is heard as a higher pitched crackling. With the elevated treble response, you’d expect the distortion to be accentuated but it’s not. The ADX is both incredibly detailed and musical. Crazy.

Bass speed seems to be the ADX’s only weakness… well, compared to super-fast cans like the Utopia and LCDi4. Leading edges are not as sharp and there’s a bit of prolonged decay. You definitely hear it in the rolling kettle drums in The Battle - Hans Zimmer and pulsing bassline of Limit to Your Love - James Blake. Bass speed is excellent, but falls just short of the best examples you’ve heard.

Bass response extends down further than you initially think. While not completely flat like an Audeze planar, it’s very, very close. The ADX might have the most linear bass response that you’ve heard out of a dynamic driver. Hitting the low notes in Lemon - NERD seems effortless and bottomless.

Compared to the Utopia, the ADX is smooth, if somewhat tame, lacking the Utopia’s gut-busting punch. Classical, Opera, and jazz may be the ADX’s forte as those genres take advantage of the ADX’s expansive soundstage to present each instrument in its own natural and not-overblown space. Imaging is precise and layering is handled with aplomb.

Final Thoughts
The ADX is going to replace the Utopia as my office headphone, and thus the one that gets the most head time. The Utopia is comfortable, but the ADX disappears. I was banging my head along with some metal and the ADX didn’t even move whereas the Utopia would have been flying across the room. I love the Utopia and will always cherish it as my reference set for critical listening settings, but comfort goes a long, long way towards the ultimate enjoyment of any piece of headgear. It’s why I call the ADX: All Day Xcellence.

6 posts were merged into an existing topic: Headphone Technology, Transducers, and Fatigue