One comparison I can comment on and find funny is the Abyss Diana (not sure which version) and T50rp I heard side by side in the Geshelli room. Probably a lot to do with power but the Diana sounded awful compared to the Fostex.

The Diana seemed to reveal the limitations of Geshelli’s basic DACs and opamps. It sounded horribly compressed and forward. The mere fact that a visitor loaned the Diana and that Geshelli was promoting the comparison suggests to me that some headphone owners don’t have a clue about suitable headphone setups. While Geshelli is very respectable in the $200 to $400 price class, the don’t stand a chance against high end amps and DACs (nor even against my Bifrost 2/64).

Most systems sounded pretty good but the duds stood out.

Indeed, as long as the treble was under control. Spend $10K or $100K and it’ll sound pretty good.

I put them in my ‘niche’ category (see my post above). These were old school vented wooden box cabinets. My take was a more compact update to the ancient Klipsch open wooden boxes. They vibrated all the high range image and definition away. Intended for the nostalgia and vintage crowds IMO. Fun for a song or two, maybe.

My ‘worst of show’ on technicalities was the pro-audio inspired, adapted(?) guitar hardware from Terry Audio. They sounded abysmal when I entered the room: really heavy and thick and and just off. The creator bent down and changed the timing modes several times – they were much better than the starting mode but still more like a plastic box speaker’s timbre than anything. I took these as of interest to fashion decorators or the pro audio crowd. In the past I’ve run music through my guitar amp cabinet speaker and hated it – this was a commercial version of a similar effort.

Honorable mention for misguided demos: BlackIce for playing at 90 dB.

@generic - sorry I missed this post. I would’ve loved to meet up with you. Does your attendance at CAF mean you’re local to the DC area?

I’m in the broader DC area, yes. Will send a note later.

Some of the vendors listed Eggleston as a ‘carried brand’ but I don’t recall seeing a setup. I could have missed it, as I prioritized headphones. I heard quite a few QLN speakers in the general integrator/retailer booths, and they appeared to fit the default under-the-radar-quality niche (e.g., starting sub $10K).

My ‘worst of show’ on technicalities was the pro-audio inspired, adapted(?) guitar hardware from Terry Audio.

I think I missed that setup

. There were so so many setups at CAF that I was overwhelmed haha.

Honorable mention for misguided demos: BlackIce for playing at 90 dB

That was the Klipsch room I took a picture of. They were playing so so loud and that was exacerbated by the brightness of the Klipsch speakers they were demoing haha.

That’s just…so loud. Even for my standards. No wonder the older audiophile community (sorry for the generalization y’all) is known for their such bad hearing. 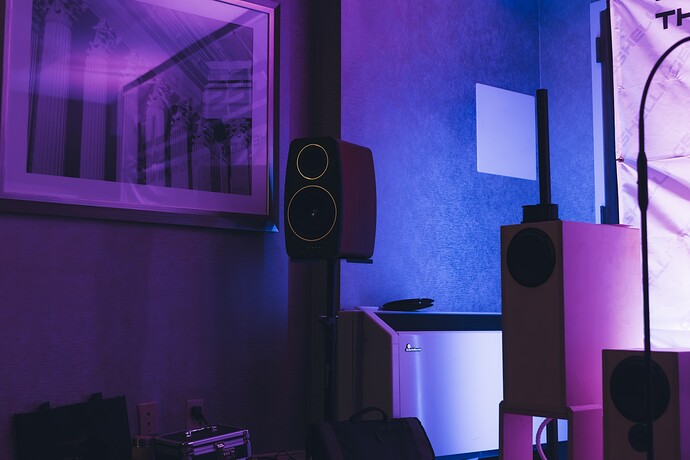 Unlike my visit to Capital Audiofest last year, I did not spend much time listening to speakers this time around. From a cursory review of the exhibitor list, I did not see many engineering-focused speaker brands. Most speakers I heard at the show last year were overly bright, a fact I will let speak for itself.

Further, the limited variety of music available to demo speakers with at the show last year was a major hindrance. It is difficult for me to tell whether I like a pair of speakers without being able to use them to listen to music I listen to on my own time. While many of the typical demo tracks at audio shows have more dynamic range than my typical musical repertoire, it is impossible to evaluate a pair of speakers using only music where very little is actually happening. Last year, Spatial Audio Lab was one of the few speaker brands which allowed me to play music with actual bass content. 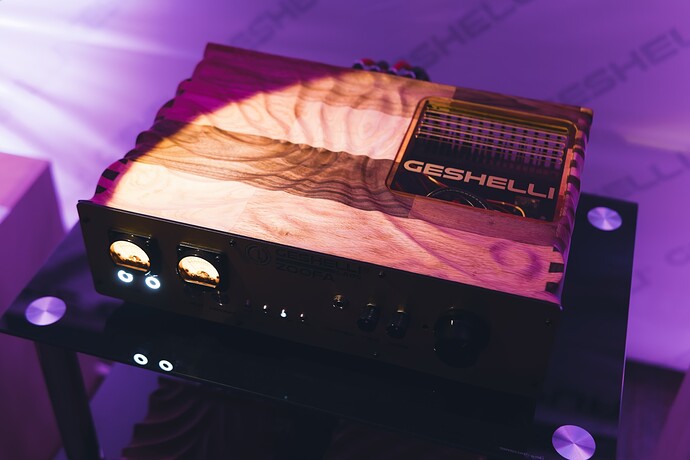 The main standout for me in terms of speakers this year was Philharmonic Audio, who were demoing their new BMR Tower. I also spent a significant amount of time talking with the Geshelli Labs team, who were debuting their new speaker amp. They were tremendously friendly people, and the unique design language of their products is an important competitive advantage in a headphone source and amplifier landscape that is increasingly “good enough” across the board. Otherwise, I focused on touring the headphone lounges scattered throughout the convention.

The impressions below are based on notes I took contemporaneously to my listening experience. They should be taken with a grain of salt given the noisy background listening environment. 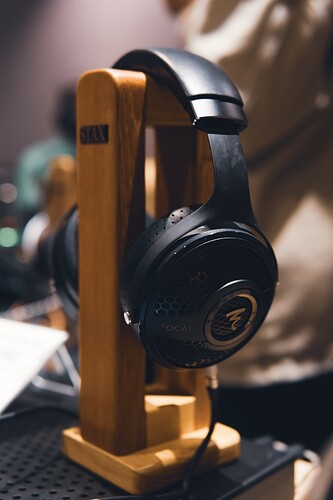 I was disappointed in the 2022 version of the Utopia. From admittedly distant memory, it did not sound nearly as good as the earlier version. The Utopia 2022 was very vocal forward, to the point of being shouty. It was also slightly muddy-sounding, with limp bass and a closed-in soundstage. Detail retrieval was underwhelming, and the timbre was distinctly metallic. 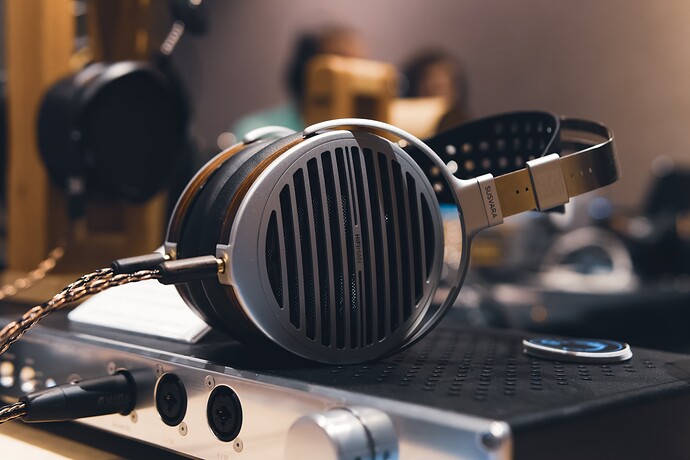 The Susvara sounded much more detailed than the Utopia 2022, with much better instrument separation, bass presence, articulation, and extension. Vocals still sounded quite forward, to the point of being slightly sibilant.

This was my first time hearing the NDH 20, and I was very impressed. They were very detailed for being closed-back headphones, with a natural-sounding tonality. The NDH 20 seemed to do a better job of integrating vocals and instruments than the first two pairs of headphones I listened to. The NDH 20 also had excellent bass performance. Soundstage size was moderate. 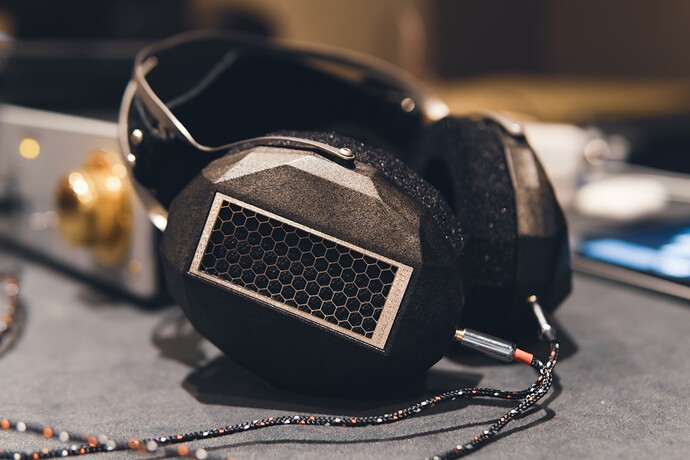 This headphone was the highlight of the show for me. It had a unique, speaker-like physicality and excellent tonality. It also had superb upper treble extension and tremendous detail retrieval. I would rank this right up with the STAX SR-X9000 in terms of being one of the best headphones I have ever heard.

The Focal Utopia 2022, HiFiMan Susvara, and Neumann NDH 20 were powered by a Headamp GS-X mk2, while the RAAL-requisite CA-1a was powered by either a RAAL-requisite HSA-1b or a PDA-1a. I do not know what digital-to-analog converter was used at either listening station.[Processing:

The main standout for me in terms of speakers this year was Philharmonic Audio, who were demoing their new BMR Tower.

Ah yes, Dennis Murphy’s speaker company, no? I met Dennis through Jim Salk of Salk Sound speakers - Dennis being the crossover designer for Salk. I cannot say enough good things about Jim and Dennis: they are truly masters of their craft and I’m proud to know them and have had several interactions and get togethers with them (only over the phone and through Email
with Dennis unfortunately). Their speakers are top of the line performers, but priced far aggressively than the B&M boutique brands. Highly recommended!

Back to your regularly scheduled program.