Astell&Kern’s latest Digital Audio Player, the “SP1000M” is part of their flagship sub-brand “A&Ultima”, is a more compact take on their flagship SP1000. It features the same dual-AKM4497 DAC design and base operating system/software capabilities, a slightly more powerful output stage, a super-responsive UX running on an 8-core SoC, and the ability to act as a USB DAC, a USB transport (feeding an external USB DAC), Bluetooth source, and a self-contained WiFi-capable streamer (with built-in support for DLNA, TIDAL and Deezer, and the ability to side-load various Android streaming music clients), among many other features: 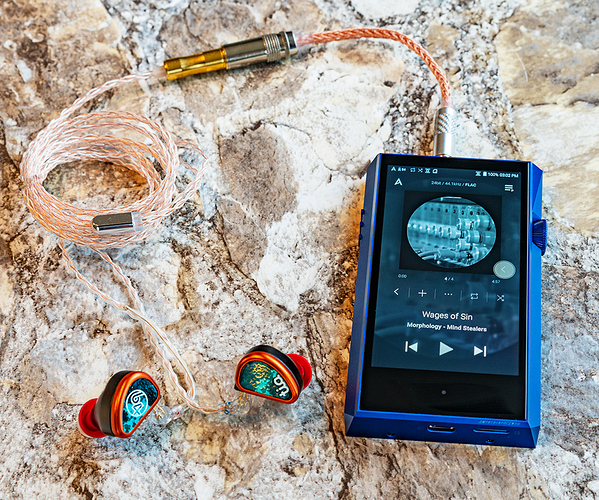 Thanks to the “Community Preview Program” I’ve been listening to, and exploring, this little guy for the last few days and it has gotten an entirely un-expected portion of my listening time. Paired with the tia Fourté it’s the first player I’ve heard in a long time that has genuinely rivaled my current reference-player, the Sony NW-WM1Z, and it does so in smaller, less expensive and much lighter package.

First impressions are entirely positive, even using the single-ended output into proper headphones. And the only niggle I have so far is that macOS users have to use the rather janky “Android File Transfer” tool to access the unit’s internal storage (for microSD cards, you can just mount them in a card reader and access them directly).

I’ll have a full review in the near future, but am happy to answer any questions in the mean time.

Some things I’ve tried with this unit already … beyond plugging in headphones/IEMs and playing files off local storage:

That’s a quick run-down of things that are often problematic with highly-featured DAPs and that I wanted to check out sooner than later.

After nearly two weeks with this unit, and almost a week of that spent in and out of various doctors offices and skilled nursing, this thing has been a god-send and an absolute delight to listen to.

And while it could, reasonably, be argued that I have, at best, a tenuous grip on sanity on a good day - this SP1000M, a micro SDXC card stuffed with half-a-terabyte of locally stored tunes, coupled with TIDAL streaming, and a pocketful of IEMs, most notably the tia Fourté, has helped me maintain a grasp on those last remaining slivers of said sanity.

Yes, I’d like it a little better if it had more onboard storage (there’s a new “Gold” version, with a brass body and actual gold-plating that has 256 GB internal storage for $600 more and an increase in weight of nearly 50%). I’d certainly prefer it if I didn’t need special software to address that internal storage (I’ve ditched the free “Android File Transfer” for “Commander One Pro” which is a marked improvement). And I wouldn’t complain if it had more than the 10 hours or so of battery life it has consistently gotten, even when streaming via WiFi.

Beyond those three niggles … which really are niggles … I love this thing. The relative lack of storage vs. my Sony WM1Z is easily made up for by the SP1000M’s ability to stream. Keep a bit of space free on the internal storage and it’s easy to download a few last-minute albums on-the-go (tethered to my phone) for off-line listening - including TIDAL Masters. The interface, while excellent on both, is a bit more fluid on the A&K unit. Yes, the Sony will run for more than twice as long on a charge, but it takes twice as long TO charge too. And the Astell&Kern wins by a mile in terms of weight and size … I do love the Sony, and especially it’s 4.4mm connection, but it’s a bit of a commitment to travel with it.

Sound-wise … there’s really nothing in it. They’re different in signature/presentation and technicalities, but both are superlative and it’s a definite case of six-of-one and half-a-dozen-of-the-other.

I could, and have, listen to either all day.

Full review still coming, and there is quite a bit to this player beyond how wonderful it sounds, but this is so good that it has me wanting to check out the other new A&K players - for those times/places when it probably isn’t smart to be toting around something quite so expensive and portable in a pocket.

Nice! I loved Norton Commander back in the day. I hate Android File Transfer so much that I actually just use adb push from the command line.

It’s not a full replacement for something like the old Norton tool, nor for the “Total Commander” tool on Windows, though I haven’t really played with it in anger for general macOS file-management yet … but it is much nicer than “Android File Transfer” for the A&K DAP at least.

Some size/weight comparisons between the DAPs I have now …

The SP1000M is already very portable - a lot more than the Sony, and more than you might expect just looking at/comparing from the picture. The SR15 (proper thread for that sometime today) is even smaller - and seems smaller still in actual handling/use. Reminds me of the original AK120 … which was half the size I expected it to be from pictures … only the SR15 feels more solid, is vastly more responsive, and sounds better.

We’ve had the SP1000M in our office for over a month now and it’s probably a criminal shame that we have not been using it for headphones more often but it has found a permanent place in our two-channel set-up using the line-out on the player.

We’ve tried a couple of different sources with the set-up but so far the SP1000M has stood above them all. It’s genuinely the first DAP that I am actively considering purchasing for myself. As you mentioned, it’s light, very light and has plenty of juice to power most headphones. And with the ability to do Tidal offline now with A&K players, the convenience factor is also there.

Interesting that you’ve been using the SP1000M as a transport!

I’ve tried that with it feeding both a Hugo 2 and the DAVE and it does an excellent job - they must have paid an unexpected level of attention to detail on the quality of the output implementation.

And my experiments there were mostly to see a) does it work, b) how well (it’s excellent) and c) in advance of the Roon-Ready firmware update, which will let me use it via the Roon interface with TIDAL and Qobuz as well as my local library, as well as in full-blown portable-DAP mode.

I’ve tried that with it feeding both a Hugo 2 and the DAVE and it does an excellent job - they must have paid an unexpected level of attention to detail on the quality of the output implementation.

It performs at a level that neither @andrew or I were expecting. It is just a fantastic little unit. We are looking to add the Nucleus+ to our set-up though so we will see where the SP1000M ends up after that.

I really need to get more head-time with the SP1000M and some full-sized headphones (Utopia, LCD-X) rather than just the Elegia though. Hoping this weekend will be a good time for that!

Are the A&K or Sony DAPs better than the RME ADI-2 DAC for IEMs?

I’m seriously considering going almost exclusively IEM and a DAP would be a little more convenient to and from work (I take the RME in a case) and clearly more convenient if I leave town.

I’m not willing to sacrifice sound quality for convenience, however.

It depends on which players you’re talking about and, to a certain extent, which IEMs you’ll be using.

Versus the Sony players, the RME ADI-2 DAC beats the ZX2 and ZX300, is about on par with the WM1A in technicalities, and falls behind the WM1Z. Beyond technical differences, the presentation/signature is different too … so while I would put the WM1Z as clearly better technically, you might still not like the way it renders vs. the RME unit.

With the A&K players, the SR15 is close but not quite there. I prefer it, slightly, over the ZX300, and the A&K has more features than the Sony’s, but step up to the SP1000m and its clearly better than the RME.

The A&K players exhibit the lowest (none, essentially) hiss with IEMs vs. everything else. The RME is next then the latest Sony’s (which are still extremely quiet in this regard, even with annoyingly fussy IEMs like the Andromeda). Though to put that in perspective, you’ll have to specifically listen for any hiss with nothing else going on to hear it at all with any of these units and the most sensitive and fussy IEMs I’ve tried them with.

Direct WiFi streaming is a definite boon on the A&K players, and they’re better behaved as USB DACs than the Sony players too.

The SP1000m might be up my alley, then. I looked a little bit on my own and it seems the Sony can’t stream, which is a dealbreaker. I’m perfectly cool with having to use Wi-Fi to stream on the A&K.

If I go the route I’m considering, I’d have to sell some of my gear to get the SP1000m, so I’ll have to look at the pros and cons closely.

The Sony can’t stream on-device. You can use it as a USB DAC and use whatever it is connected to (PC, laptop, tablet, phone) to stream to it.

The A&K players can directly stream via the respective Apps (inc. TIDAL, Qobuz and Spotify) over WiFi.

Also, both the Sony and A&K players make fabulous transports … if you wanted to keep the RME ADI-2 DAC around …

There’s a new firmware update available for this, v1.20, new enough that it’s not even posted on the A&K support site yet.

Updates include support for 1TB microSDXC cards and some new OpenAPK services (including Apple Music and Foobar).

Listening to one of my favorite travel albums, Wadada Leo Smith’s “America’s National Parks” via my new SP1000M, balanced Plussound cable, and InEar Prophile 8 IEMs. Compared with the Q2PR it replaced, better dynamics, more substantial bass, more overtone detail for piano mids and highs, and for cymbal decays. When I listened to Miles “Bitches Brew” to the new DAP, I was really surprised how much closer to my full headphone and speaker setups this was. Maybe a little too “full” even compared with Yggdrasil A2>EC Aficionado>ZMF Verité silkwood, but very engaging with a shade of warmth but no boom. Thanks @Torq for all the information that led me here!

Hello and welcome @earnmyturns. That’s a great setup you have there.

What’s up with Roon Ready? Can’t find much info on it except for a late 2018 A&K press release. I’d like to be able to use my SP1000M as a WiFi endpoint for my home Roon setup.

When I connected my SP1000M to a bluetooth device, I have to turn up to volume to almost 100 to have a reasonable sound level. Anyone experience this and is this normal?

Now if only Roon Labs and Astell & Kern only finished their delayed collaboration… I much prefer Roon’s interface to digging around my raw music library with a DLNA client, but the music still plays…