And beyond that, there’s absolutely placebo to consider. There may be some (or many) that are so clear-minded and analytical in their listening, even when in a more casual setting, that they could pick what is superior (to their preferences ofc). However, for many, I imagine, knowing one is newer and costs 3x or 4x can push that subjective “enjoyment” in a specific direction.

for many, I imagine, knowing one is newer and costs 3x or 4x can push that subjective “enjoyment” in a specific direction.

Our experience of audio is entirely subjective and inextricably linked to psychology. If believing that a more expensive cable makes my headphones sound better increases my subjective enjoyment of them, what do I care whether it’s empirically true? Can empirical truth even be applied to a subjective aesthetic experience? You can argue all day long about the science of sound, but psychology is a much trickier beast, and for better or for worse the two are indelibly intertwined.

Oh, you’re preaching to the choir. There may be some science that can be translated… and that likely holds a percentage of the overall “score,” the psychology is prob 90%+.

Yes, we do all have ears and there are indeed certain facts about human hearing that we know, but the experience of hearing (the actual infinitive “to hear”) is psychological and therefore entirely subjective. Does my eardrum physically react the same as your eardrum to a particular frequency? Let’s say it does. That still doesn’t mean we necessarily hear the same thing. Stimuli is objective and lives in the physical world; sensation is subjective and lives in the mind. Sort of like asking if you see as “green” as the same shade I see as “green.” We can never know.

All of which is just to say that believing that a more expensive cable or headphone sounds better actually makes it sound better.

This is the problem of qualia, and that will always be a an issue when considering any perceptual phenomenon.

It might be better to say that is the fact of qualia, or even the reality of qualia, not the problem of qualia.

So while I still prefer the default tonal balance of the LCD-X 2021 in the lower and mid treble, the LCD-5 has a decent tonal balance overall that shouldn’t be difficult to EQ. I was worried it would be a bit shouty, and the upper mids are definitely quite present, but so far it seems to be on the right side of that for me, and personally, on first listen, I find it to be more enjoyable than the CRBN. With that said, I’m still in the process of dialing in my EQ, which is still something I absolutely recommend doing for those getting into Audeze headphones - even if only because these can take it so well.

I never expected the use of quailia to be thrown in an audio discussion, I am no philosopher nor psychologist, yet it does seem to be used incorrectly here. Thought I would point that out, so if we are throwing around a philosophical discussion let’s have at it;

Psychological, physiological, and other external stimuli have an effect on how we hear, see, taste, feel, etc in the same manner that our self perception of those same sense can vary from day to day, hour to hour, and so on.

What does this have to do with the LCD-5? I have no F’ckn clue, you can’t measure that stuff as we are not robots. Last night I stayed up until 2 am enjoying a wonderful pair of headphones, tonight I am butt ass tired as I had to get working at 7am. So my perception and senses are all messed up, and mind is weary. If I was listening to the LCD-5 I am sure this would be the same result, there I made it about the actual thread.

I have had the LCD 5 for almost 2 weeks and I am a big fan of the LCD-X and Resolve but I don’t think this is close. The LCD 5 IMHO is a much better headphone. Better details better balance better just about everything. In certain areas mentioned by Resolve I would say to my not so great ears it is a toss up and probably just a personal preference issue. I was reluctant to buy these having just bought the Carbon but I definitely have a new favorite Audeze and that includes the Carbon, my LCD4 and my LCD-X. But as always various opinions make for interesting horse races.

Thanks, that’s what I would hope. I think the comparison is more to do with the added ear gain (2021) than anything else, although I am particularly interested in any potential differences in bass, imaging and soundstage if you care to comment.

If you’re interested in an LCD-X vs LCD-5 comparison, you might find my MX4 vs 5 bass and dynamics comparison on head-fi useful. I didn’t compare any other part of the sound spectrum, but if you are interested I can add to it.

Personally, I found the LCD-5 to be much more resolving than the MX4, with better vocals and better midrange clarity.

I agree with this.

Of course the LCD-5 is going to be better than the X. 4 times better, though? Maybe not.

I think any comparisons like that are welcome here on this forum.

Please do share (including which revisions of the 4 and X you have). Thanks!

A long time ago I came up with The Law of Individuals And Aggregates as a result of my frustration with psychological and sociological research which later applies equally well I think to quantum mechanics (Schroedinger’s equaition and the collapsing of the waveform). The law states that you can make informed statements about aggregate behaviour but you can never predict individual behaviour with certainty. This especially applies to the Harmon Curve and the research of Sean Olive. I’m somewhat more skeptical of that research than you and had a smug laugh to myself when Olive answered your question about how to apply his research to a newcomer to headphone listening in your recent interview. To paraphrase his answer he said to use the curve as a starting point to narrow down a list of potential headphones and then go out and listen to them to see which they preferred which to my mind and the limits of listening opportunities in any geographical area equates to go to the dealers in your area, pick a price point and see what you like.

My comment regarding the X and 5 being similar was regarding the ear gain region and broadly flat mid/low end. The 5 to my ears is significantly more resolving and dynamic. Hope that helps clarify.

For anyone who has an LCD-5, give this EQ profile a shot and see what you think. Once again, these Audeze headphones take so exceptionally well to EQ that I feel one would be missing out without at least trying it: 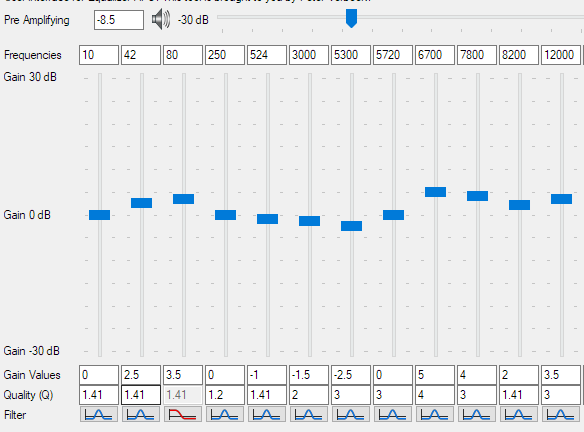 While not a criticism necessarily, I do think the default tonality could come across a bit congested as a result of the subdued treble, so this serves to lift that a bit, and I added a bass shelf for fun because the bass on this headphone is excellent.

I went with a bit more upper mid and treble energy to compensate for my wonky ears: 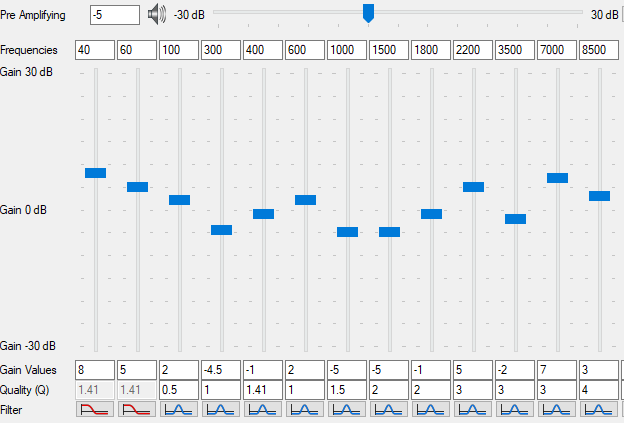