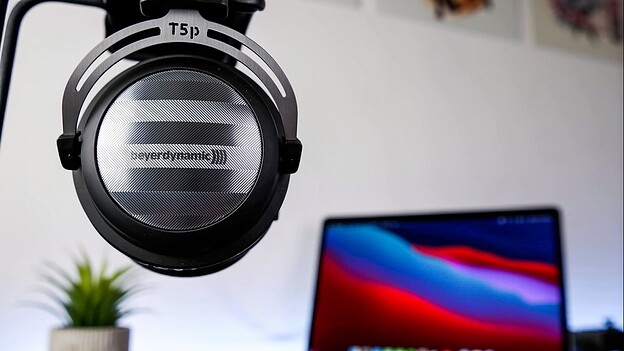 The Beyerdynamic T5P is Beyerdynamic’s premium, high-end closed back headphone; and the one reviewed here is the second generation of the model. Like its predecessor, it’s utilizing Beyerdynamic’s Tesla driver technology, which means that the T5P is extremely efficient and can be powered from low-output sources like phones and tablets.

The Amplifier/DACs used in this review were the SPL Phonitor XE (with built-in DAC), Grace Design SDAC + Topping A90, and the JDS Labs Element II connected via USB to my desktop computer. For the listening tests I used music from a wide variety of genres including Rock, Jazz, Classical, Acoustic, Hip-Hop, and latin. I played tracks from my own FLAC library as well as from Qobuz streaming service played via Roon (exclusive mode).

Considering that it’s one of Beyerdynamic’s premium offerings, I was actually pretty disappointed with the included assortment of accessories. Unlike the DT 1770 Pro which includes a case, two cables and two sets of pads, the T5P only includes a velour-wrapped case and a 1.4m-long dual-sided 3.5mm to 3.5mm cable with a ¼” adapter. 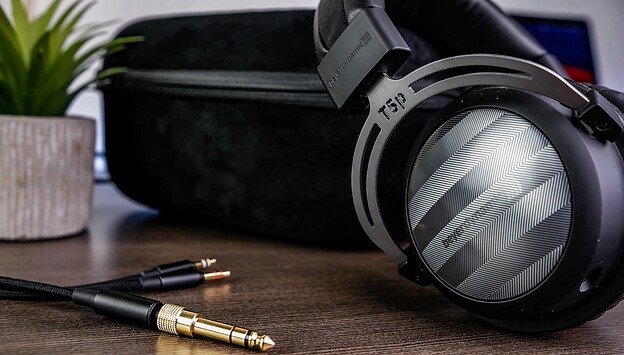 Now, a lot of other closed-back headphones around this price range include a similarly scarce set of accessories, but I was a bit more disappointed with the T5P because at $999, it actually included less case candy than its less expensive siblings. Given their efficiency, I think that a balanced cable would have been somewhat redundant, but a second set of pads with an alternate tuning would have certainly been a welcome addition.

As always, Beyerdynamic does not disappoint with the build of its headphones.

It uses a bit of plastic, but the T5P is composed primarily out of metal and it feels extremely rugged. Of course, I can’t attest for long-term durability, but out-of-the-box it feels premium and very well put together; the ear cups adjust smoothly, the extension mechanism of the headband gives good feedback, and it’s got no loose or creaking parts.

Comfort is usually one of Beyerdynamic’s strong points, but the T5P not only doesn’t feel as comfortable as others I’ve tried like the DT 990, 770, 1770, or 1990 Pro, but I’d even caution that it could cause some mild discomfort. At 330g it’s pretty lightweight, and it’s also got an easy-feeling clamp force. However the problem comes from the ear cups themselves, as they verge on feeling like on-ear headphones–and I don’t have particularly large ears.

Ear cup size isn’t an issue I’ve have with Beyerdynamic headphones, but the T5P’s cups are really small, and I always feel like the top and bottom parts of the pads are pressing against my ears. So, if you’ve got large ears and are sensitive to pressure, then the T5P might not really be a good fit (literally) for you.

One last thing to note is that as a closed-back headphone the T5P offers very good passive noise attenuation. When listening to music I couldn’t hear any noise from outside, and they also kept sound in, without any major leaking; so they’re very good for when sound isolation is needed. 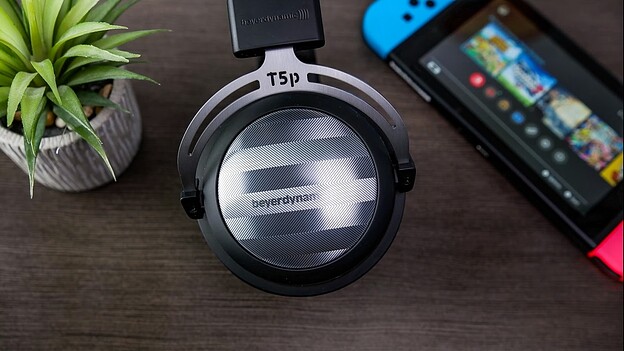 Unlike the other headphones I’ve tried from Beyerdynamic, the T5P is not intended for pro studio use, and is instead meant to be a more musical and warm sounding headphone that provides a more relaxed and pleasant Hi-Fi experience.

Well, in my case, I wouldn’t say that the T5P came through as being the smoothest headphone I’ve listened to, as I would actually say that it’s very likely the most intense-sounding one I’ve heard.

The bass feels intense, the mids feel intense, and the treble feels intense. In every region of the frequency response, the T5P seems to have some rather pronounced elevations, lending it an odd and fairly aggressive, W-shaped sound signature.

The T5P’s driver actually feels fast and well-controlled in the bass region, but unfortunately when first listening to it, especially without some EQ, it may not feel that way.

In my listening experience, it sounded to me as though this was due to a sizable elevation in the midbass of about 6dB, which made the bass sound very swollen, unrefined, and one-note sounding. Additionally, this midbass elevation was pretty wide so there was some slight upper bass bleed congesting the transition into the midrange. Lastly, whilst it did have good extension, the T5P, for me, seemed to roll off at around 30hz, so I wasn’t getting as much of the sub bass rumble I would want.

Compared to the AEON 2 Open, which also had a pretty drastic bump in the bass, the T5P definitely didn’t sound as boomy or bloated, but it was not particularly clean either. So overall, I’d describe the bass response as being a very warm one, but its execution lacks precision and it sacrifices the low’s balance.

It wasn’t as pronounced as on other headphones like the AEON 2 Open or Empyrean, but as a result of the upper-bass bleed, the transition to the lower mids feels a bit lacking in cleanliness. Still, this wasn’t really the main problem I personally had when listening to the midrange on the T5P.

From around 300hz-3000hz, the T5P is pretty even. But then, at around 4K it’s got a peak of about 4dB-5dB that really accentuates the presence of vocals and instruments, making the upper midrange quite forward and somewhat harsh. This may not be bothersome to all listeners, but for those who, like me, are particularly sensitive to that region between 2K-5K, then it might feel a bit too shouty, with instruments like electric guitars or saxophones coming through as shrill.

The treble region is usually where I run into issues with Beyerdynamic headphones–alas, the T5P follows suit.

It’s not as aggressive, but the treble region on it reminds me quite a bit of that of the DT 1990 Pro, as It’s got a very prominent peak in excess of about 8dB at 8K.Like on DT 1990 Pro, this rise at 8K introduced a pretty noticeable sizzle-like quality on the T5P, and although not quite as piercing, consonants were quite sibilant and sharp sounding. Additionally, it sounded to me as though it had a little extra energy at around 10K so snare drums, for example, had a bit too much bite to them.

Compared to the AEON 2 Closed or the Focal Radiance, the T5P is not the most impressive I’ve heard in this price range for its overall sense of image clarity and detail retrieval, but I still found it to deliver good performance.

The lower registers on the T5P feel adequately articulate and textured, although as mentioned earlier, I think that the bass response’s tuning didn’t really allow it to sound as tight as it should. Then in the midrange and and treble regions I felt as though the T5P was capable of nuancing vocal and instrument tones in a cohesive and structured manner. The one caveat I will add, though, is that not unlike on the Focal Clear, the peakiness in the treble could occasionally make the T5P sound a little gritty in the upper registers.

Consistent with my experience with other Beyerdynamic headphones, the T5P has very good spatial qualities, and in this regard it handily outperforms the other closed-backs I’ve listened to in this price range.

Its soundstage has a moderate amount of depth and width to it, which creates a surprisingly open-feeling listening experience in the T5P’s small cup enclosures. Then for imaging, the T5P is remarkably precise; with all the different sound cues and tracks feeling realistically positioned and distributed across the stage. Additionally, it delivers very good performance for the layering of instruments, as all the different lines composing complex musical passages were kept distinct and they had a space of their own in the mix.

It’s not as punchy as the discontinued Elegia or the Radiance, but the T5P still provides a very good sense of punch and slam, with engaging dynamics that kick and rumble in the lows, whilst also adding a satisfying physicality in the top-end. Overall, I’d say that in this category the T5P is certainly an energetic headphone, which makes for a more active and exciting listen.

As a whole, I suppose that the T5P’s W-shaped frequency response has some balance to it. However, for me it was simply too aggressive, and I personally felt as though it got in the way of the headphone performing at its best.

After using some EQ on it, I actually found that the T5P could be quite enjoyable, and I really got to better enjoy the technical performance it can offer. If you would like to try them out, these are the EQ settings I used for the T5P:

I think that the T5P (2nd generation) is an interesting headphone. With its stock tuning it didn’t really captivate me; its tonality felt too forward for me, and its technical capabilities didn’t feel as properly displayed as they would have if it had a more appropriate balance.

Overall, I don’t think that the T5P (2nd generation) offered enough to justify purchasing over other similarly priced options. However, if you are open to using EQ I think that this one may be worth keeping an eye out for. With the third generation T5P now available, prices for this model will likely go down. And if you are able to find it at around the $650-$700 mark, I think it could make for a pretty decent closed back headphone; it’s got great isolation, an excellent build and competent technical performance.

With its stock tuning it didn’t really captivate me; its tonality felt too forward for me

You absolutely hit the mark,

The following product can help in this regard: 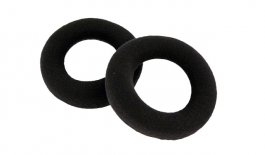 Overall, I don’t think that the T5P (2nd generation) offered enough to justify purchasing over other similarly priced options.

Even as a die-hard Beyerdynamic user for more than 30 years now, i have to agree with you.
In this price range, I clearly prefer these headphone: 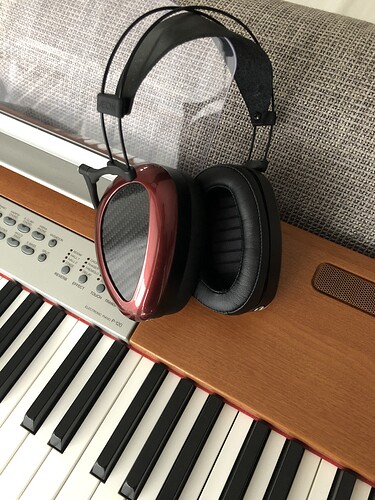