EQ for both iOS & Mac

eqMac is definitely the way to go. BUT… for some of the features, there’s a subscription for Pro. Fortunately, it’s only $3/month which to me, is very much worth it.

You can solve both problems by using an EQ audio unit plugin with SoundSource. I use DMG EQuick. There is also Apple AUNBandEQ which is included in macOS.

eqMac is a fine product but even the pro version only applies EQ to the system output.

Or use Roon to play Tidal, which has its own parametric EQ.

So I guess the bass boost of the micro IDSD adjusts the gain automatically? Isn’t that something the app could do when you fiddle with the graphic EQ?

I don’t know the details of the micro IDSD but that’s possible. Or it could be boosting bass after the DA conversion which could still make the amp clip if you crank the volume close to max. I suppose SoundSource could automatically adjust the gain but I don’t think it does. In fact every EQ software I’ve used has made me adjust the gain manually.

@orrman @AudioTool Thanks for the suggestions. I’ll try both eqMac and EQuick and see how it goes.

I recently bought SoundSource and it seems to work for what I need it to do, which is have easy access to AutoEQ settings without having to think about it. eqMac arguably looks nicer and has more functionality, but there seems to be some kind of issue where the whole application can lock up after the computer wakes from sleep. I’m not sure if it’s the app or some kind of issue on my end. I’d probably go back to it if there was a fix.

Somebody already sort of said this, but I just wanted to weigh in and say that I believe SoundSource can do everything you were hoping for. You don’t have to use predefined settings, you don’t have to script anything, you can tinker while you’re listening, and you can assign different EQs to different apps. The secret is that when you click “add effect” you then select “Apple” and you have a whole bunch of different EQs to work with. I use AUNBandEQ, which allows me to create just about as many bands as I want at any specific frequencies I want, and I can adjust as needed. I’m not sure I’ve ever used the Pro version of EqMac, but I just wanted you to know that if you purchased SoundSource, I believe it has the goods. You just have to know how to access them. 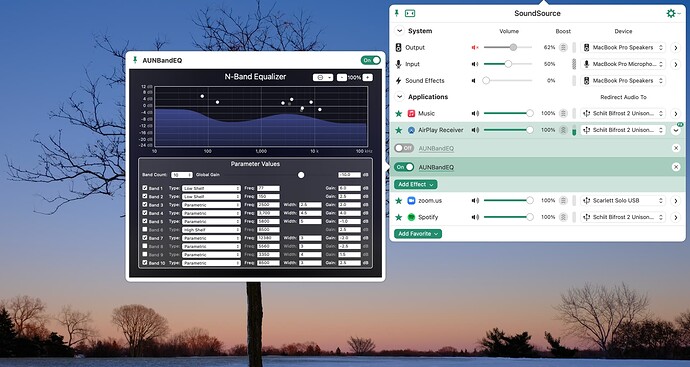 Click “Add Effect” then “Apple.” So simple, yet I never clicked it. Or, I probably did to get the Audeze Reveal plug-in.

I didn’t know this existed. It seems the width value is equivalent to the bandwidth value you’d see in the Oratory profiles? I’m not really all that familiar with EQing and just getting into it. If I use the AUNBandEQ and the profile for my newly acquired Aeon 2 Noire I’ve been trying out, it sounds good, but different than if I choose the profile from AutoEQ, so I’m wondering what the difference is.

SoundSource is profiting from their work without licensing it

I wonder who else is using AutoEQ presets without licensing it? Wavelet? Qudelix? Seems like a Pandora’s box of legalize might need to be opened.

That makes sense. In this case I prefer the manual setting (which I believe I did correctly) to the preset one as well.

It’s a thorny problem. Oratory1990 allows anyone, including AutoEQ, to use their measurements as long as they do not profit. AutoEQ allows anyone to use their presets. Companies use the AutoEQ presets without even realizing they are technically violating oratory1990’s measurement license.

Does anyone besides myself have use for a non-jailbreak iOS app with no streaming capability but with parametric EQ? Oratory1990 recently pointed out the existence of one called Studio Music Player ($4.99).

Only works on files local to the device. It provides its own file/track handling interface with some basic Fx but importantly a somewhat crippled form of parametric EQ. While it provides a long list of EQ presets, they’re limited to budget mass market stuff from 5 years ago. And it’s not possible to simply type in the vast majority of Oratory or AutoEQ profiles due to some of its limitations. it is, however, possible to work around those limitations. I’m happy to help anyone deal with the EQ quirks, if indeed there is anyone left who hasn’t totally gone over to the streaming side of the force.

I see I have some reading up to do. The whole idea of the measurement guys licensing their measurements is a new idea for me that I need to get a good grasp of. As for his own EQ profiles, he publishes all of them in PDF format. It is left to most end users to manually enter them into fields in the software.

As far as who is profiting from AutoEQ profiles generated from Oratory1990 or Crinacle or rtings, etc., I imagine there can be a contractual understanding between that project and the measurers. What that would look like is a complete mystery to me.