EQ for both iOS & Mac

I must be missing something, but if I have a digital signal coming from my Mac (I mostly use Spotify, Foobar and Apple Music) going to my DAC it seems like EQ software would have to decode, modify, then re-encode the signal before it got sent out. Is it actually the case where you can EQ a digital signal without degrading it in any way?

Is it actually the case where you can EQ a digital signal without degrading it in any way?

You definitely can EQ the digital data before sending it to the DAC. Without degrading it in ANY way? That depends on how you EQ it but some would argue you are degrading it regardless of how you EQ.

Not sure how I missed this thread until now. Regardless a few new(ish) solutions that I have used:

For Mac SoundSource has always supported audio units like EQuick but now it supports real parametric EQ internally using presets from the AutoEQ project or your own custom presets. 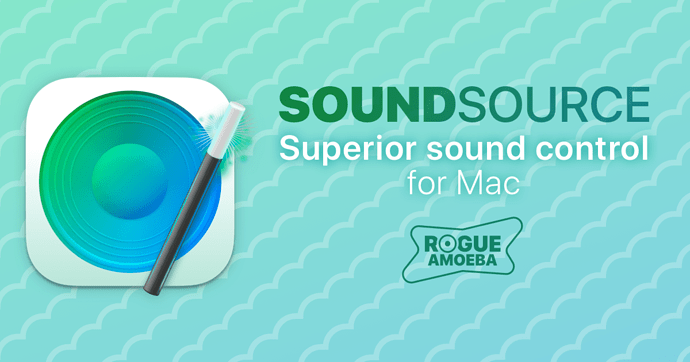 Access your Mac's audio devices, control per-app audio, and much more, all from the menu bar.

I’m using SoundSource, but my version would appear to only have fixed-band EQ. I’ve been pleased, however, with how the Audeze Reveal plug-in has been performing with my LCD-2. Here’s a screen shot: 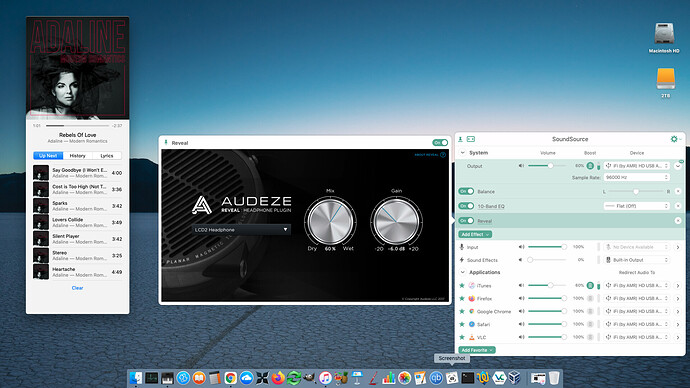 So, upon further review, I discovered that my version of SoundSource does include the parametric equalizer. However, it only works on the default audio device output, which can’t be changed easily in the MacOS system settings of Mojave. Luckily, some smart guy on the internet developed a script that can do it. I just pasted his code into the Script Editor program and modified two lines to reflect my hardware. Basically, I had to change the OS’ default from the default of internal speakers to my iFi iDSD Black Label DAC/Amp, which is of course connected via USB. 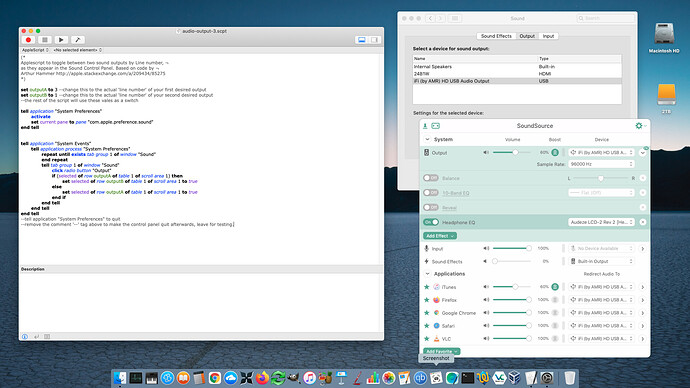 Now I can use any # of PEQ presets from the AutoEQ project, including Headphone.com’s.

That’s interesting. On Big Sur, going to the speaker in the upper right corner of the screen lets you change the audio device output, and it’s sticky. I thought it was the same in Mojave. Are you saying that even though you can change the output like that, it’s not the default?

I don’t use SoundSource, so it doesn’t apply to me at this point. ROON’s EQ is what I use on my mini.

However, it only works on the default audio device output

That’s strange. On Big Sur the EQ follows whatever device is selected for System Output in SoundSource. So the only limitation is that you can’t apply the EQ to individual apps like you can with an AU like EQuick. Other than that it just works.

Weird. It might just be my stubborn refusal to upgrade my OS version is to blame? I read about all the problems folks seemed to be having on Catalina and just said no way.

Yeah, that’s what I’m saying. I was obviously able to change my outputs, otherwise no sound out of my DAC/Amp. SoundSource wouldn’t reveal the “Headphone EQ” option until I went through this hassle of creating and running the script.

In the manual it says "Headphone Equalizer is available exclusively on the default output device."

Weird little feature change stuff like this happens between MacOS versions. It was probably just Mojave.

Anything new here? Mostly stream off my iPad and would love to do some EQ.

I tried hard to find an EQ solution for the iPad (or iOS in general), and there might be specific streaming apps I don’t use (like Roon and Qobuz) that have real EQ functionality, but there’s nothing sytem-wide, and the EQ in apps like Spotify and Apple Music are of course incredibly meager, imprecise solutions. I gave up and bought an iFi amp/dac with bass boost for a bass shelf (in my opinion, the most important EQ adjustment for most headphones), and otherwise I listen from my Mac with Soundsource.

Good to know! I’m running off the iFi Signature until I decide to build out a less mobile listening station. Definitely using the boost.

You are correct. @elliot and I have been hoping for something system wide, but Apple doesn’t make it easy. It’s not hard to find something that works for something specific. As you say ROON does have EQ for anything played through ROON. I often use AUDEZE LCDi3 IEMs on iOS and their app plus the Cipher cable will let you EQ anything through there. Likewise, if you use Ultimate Ears custom earbuds, their app lets you EQ - and I think there’s a version for MacOS.

One possibility is the Neutron Player App. It has a bizarre interface that some people love, but has both parametric and graphic equalizer, very configurable. It’s cross platform Windows, Mac, iOS and Android. I personally find it difficult to use, but I think others here may know it better. Bit Perfect output is possible. See neutroncode.com the developer website.

I guess in general everyone is hoping that sometime Apple will offer something better by default. I’ve only been waiting since my Macintosh IIsi and my iPhone 4. (Not counting the Magic Sac on my Atari ST).

JRiver Media Center has decent built-in PEQ that works in Mac OS X, for what it’s worth. They offer a free trial in case you’d like to try before you buy.

Would you happen to have a 10-band EQ for the Hifiman HE400SE?

Was hyped to finally try out EQ for the first time and downloaded soundsource. I first tried the “bass booster” and the bass got horribly grainy and saturated, like full of static (sorry I’m having trouble finding the words).

This is on a HE1000SE through a micro IDSD signature from my Mac. The bass boost on the IDSD works just fine, but I was hoping to try out the recommended EQs for my HP.

Is this normal ? Hope it isn’t…

Love that software. There’s lots to it. Here’s a screen shot of my config at the moment: 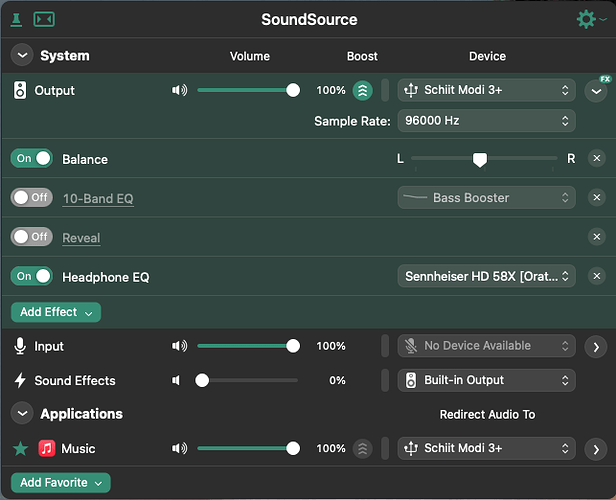 Is this normal ? Hope it isn’t…

No. It sounds like you might be pushing the bass level beyond max causing the signal to clip. If you boost any frequency range without a corresponding reduction in overall gain, this can happen. So a +3db bass boost should include a -3db preamp gain or clipping can occur.

I recommend staying away from the graphic EQ in SoundSource anyway. The parametric EQ is where it’s at. Start with the built-in Headphone EQ, like @InvisibleInk is doing for his Sennheiser HD 58X. Those are parametric EQ presets from AutoEQ. If you think those are going in the right direction, then use SoundSource’s custom profiles for Headphone EQ using oratory1990’s presets (see how oratory1990 includes a negative value for preamp gain in his presets?). Or as an alternative, create a custom profile using the profiles you can find in this forum like Chrono’s. Either way, use that as a starting point and tune to your taste.

Wow, thanks for the illuminating reply.

I’m disappointed though. I thought I would be able to tinker with EQ while listening, to see what settings I like best. If I understand correctly, with SoundSource, if I want to avoid the clipping issue, I have to settle on predefined settings and if I want to try my own, I have to script it, then upload it to SoundSource, then try it out, then go back to the script to adjust. That makes the whole process unintuitive and, for me at least, not worth it.

The added problem I’ve found out (thanks to the customer support over at SoundSource, which, as they claim, is indeed amazingly responsive!) is that the Headphone EQ can only be applied on the System output, and not on the app output. This means that I can’t shut the system off to just listen to Tidal with EQ (or some other app). if I use the headphone EQ, I’m going to hear any sound that comes from any app on my Mac, unless I manually shut each of them down every time I play Tidal. Again, not worth the hassle.

So I guess the bass boost of the micro IDSD adjusts the gain automatically? Isn’t that something the app could do when you fiddle with the graphic EQ?

Anyways, it’s a shame, the app had so many things going for it…

I suggest looking at eqmac, you can control the EQ directly from the software with no scripts and adjust it on the fly to see how things would change. You can also save presets directly in it and switch between them. I usually have one with the EQ and one without it but with the reduced gain so I can compare same listening volumes with and without eq.
It also includes the app control I think you’re looking for.