That’s correct. We received 2 units to showcase. 1 went to the first customer in North America to purchase to demo it while he waited for the production unit, the other was used to showcase in California and was supposed to be a production unit.

Both those units need to go back to Michael as there was an issue present with them that was not found in initial testing and is the reason for a slight delay on the first production run to North America.

For those asking, Michael has said he expects the first 10 units (of 15) to ship from Germany on November 7th. He is being extremely diligent in his QC checks and the remaining 5 units should be ready shortly after the first 10 units.

After that, we’ve been told that we’ll be receiving 25 units of the 50 units slated for 2023. Those units are scheduled to start shipping in May but we won’t know a for sure date until it’s closer. That batch is 60% sold-through for anyone that’s thinking of getting in.

May? I was led to believe it was going to be March for batch 2 to ship. Oh well, so much for my 48th Birthday not sucking! 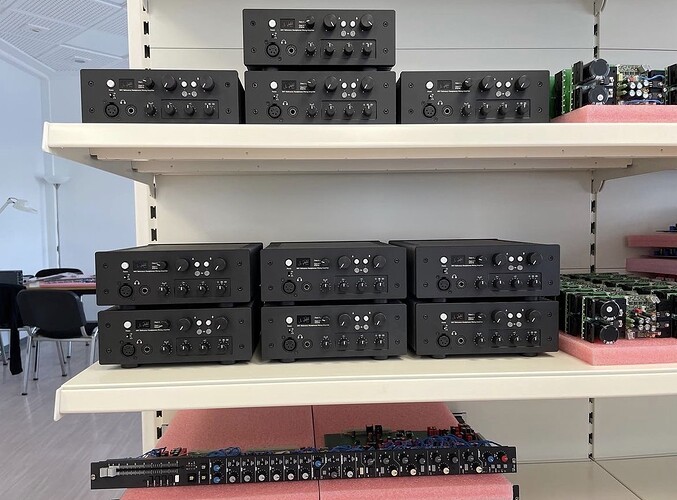 Those look like some fantastic amps. I look forward to reading people’s impressions of it once they get shipped out. A bit beyond what I’d be comfortable spending for a headphone amp but I sure hope it delivers to those lucky few who pulled the trigger.

I got to hear the unit that @GoldenSound pictured earlier in this thread with Susvara, for all of a song or two, but that was enough to confirm that I absolutely made the right choice in ordering HM1. That combo left me with the immediate impression of being in new territory. The only other chain to really do the same for me that weekend was Aperio. I’d need more head time with both of those to really feel them out & get a more total sense of what they do, but it’s safe to say that HM1 is an absolute top shelf amp for Sus, at least.

For perspective, I daily drive Hypsos + Oor and also use 2 spare channels on my McIntosh 8207 amp as a my solid state reference for Susvara, etc. I felt like HM1 surpassed both of those, but again that’s a first impression based on very limited listening, so take with a grain of salt.

I believe my HM1 is one of the 10 pictured above, so I’m eagerly awaiting a shipping notice. I’ll come back with better impressions after I get a chance to do more listening.

Hoping these arrive at Headphones.com soon!
Eagerly awaiting mine.

but damn it I need my soundstage knob

Don’t we all haha!

I look forward to your full review.

Any update on when they will ship?

Customs clearance is just finishing with paperwork and then they are on the way to us! I would expect the first shipment to leave Germany either tomorrow or Wednesday and tracking to be sent out to our customers next week for delivery.

Update: Got tracking today and looks like UPS will be picking up from Germany tomorrow.

This shipment includes the first 10 units to go into North America with the following 5 following shortly after.

For those in the 2023 shipment, we’ve been told that March / April is the current ETA but that can change to earlier (not likely) or later.

We’ve also been told that there most likely will be a price increase for 2023 due to the war in Europe, inflation and everything else causing price increases right now. So if you’re eyeballing a unit for that shipment, the price may be going up in January just as a heads up.

I ordered mine in September 21 based on a friends recommendation who uses the Zaehl AM1 in his studio. Got the tracking number yesterday from Michael. Making its way downunder to Sydney, Australia. Super excited. Will be feeding it with a Meitner MA3 and a couple turntables (Spiral Groove and Garrard 301 via a Boulder 508 phono) and it will drive 1266 Phi TC. I jumped into the headphone systems deep end about two years ago - trying to maintain domestic harmony. Still have a speaker based system though. Happy to share my experiences when the HM1 arrives though don’t have the background most have here.

HM1s have hit the US and are just going through UPS’ final customs clearance in KY and then will be on the way to our warehouse. The time has almost come!

Mine arrived today in Sydney. Probably one of the first seen in the wild outside of shows. Only had a short listen but super impressed. The 1266 finally have an amp that brings the best out in them. My bass test track is James Blake’s Limit To Your Love. Scary amount of controlled bass. Looking forward to the weekend and some extended sessions. 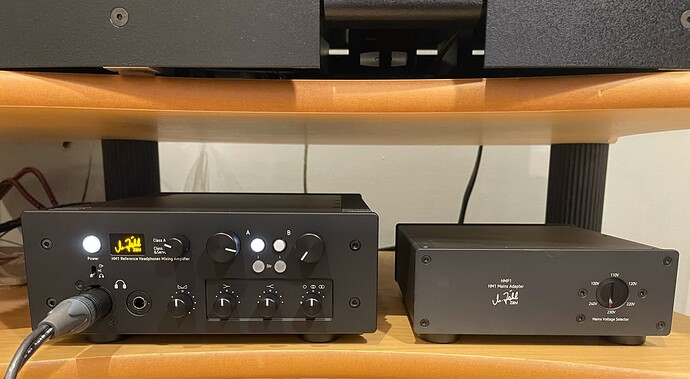 Something I’ve not been able to achieve successfully in the past. Low output moving coil cartridge (0.4mV) into a headphone rig. Thanks to the 15db boost option on the input I can now enjoy my vinyl collection via cans. 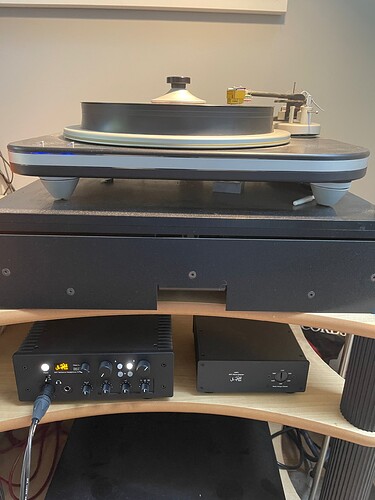 Don’t you need a pre-amp anyways to apply the RIAA curve?

You still wouldn’t get a ton of volume out of that gain setting would you? Think you need more current with vinyl pre amps/amps.

Yes. I am currently using a Boulder phono pre amp. But my experience has been with low output MC cartridges there is still not enough gain to drive my Abyss headphones with other headphone amp. The 15 db boost makes all the difference