I first heard the Zähl HM1 at Munich High-End earlier this year. At the time I was only able to try it with the DCA Stealth and Abyss Diana TC headphones. But despite the limited selection of gear I was able to audition it with, and the short duration, I knew that this was truly something special, and almost immediately after placed an order for my own unit. At long last, it has finally arrived, and now having spent some proper time listening, testing with a variety of headphones in my own system, I can say that I am beyond impressed.

When you combine a truly impressive featureset, with an absolutely no-compromise design philosophy, as well as the extensive experience of Michael Zähl himself, what you get is quite simply the best sounding headphone amplifier I have come across. However sound quality is not the only aspect that sets the HM1 apart from the rest…..

The HM1 is separated into two units, the main amplifier itself, and a separate box containing the mains AC transformer. This is kept separate as the transformer itself is a significant source of interference when designing products, and as such having them physically separated and distanced from the signal carrying components can demonstrably improve performance.

Note that the separate transformer does not output DC to the amplifier like a typical PSU, but rather low voltage AC, to prevent any potential DC transmission loss. The Transformer can also be switched to a range of input voltages allowing it to be used worldwide. 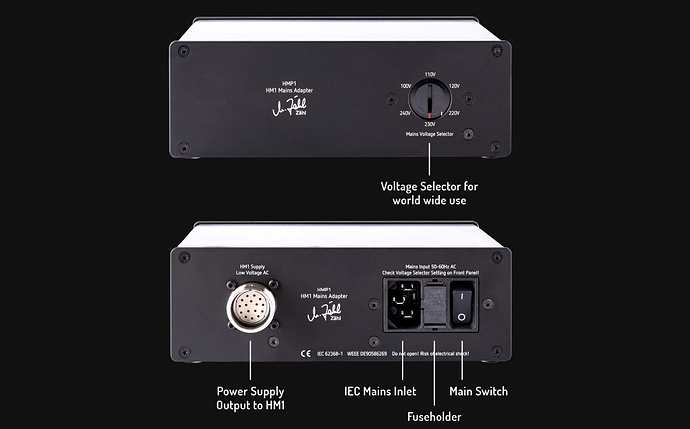 Oh…and remember how I said ‘no compromise’ earlier? Well the first evidence of this is within the transformer itself. This is not just outputting a single supply to the main amplifier. Zähl wanted to ensure that every single part of the device that could be separated, was separated. There are independent, completely potential-separated windings for the left and right channels, both for the preamp and the headphone amp. As well as another independent winding for logic circuitry and front-panel indicators, so that they do not share power with the main amplifier itself. The rectification, filtering and voltage regulation for each channel is also completely separate, to ensure that sudden power demands from one channel do not impact the potential amount of energy available to the other channel.

The HM1 is a full class A amplifier, with a power rating of 4W RMS at 30 Ohms, though with a listed 7.6W peak at 30 Ohms, and also a burst of up to 18W for short durations/transients. On the vast majority of amplifiers, feedback (or sometimes other methods such as feed-forward) error correction is inherent to the design and cannot be disabled by the user. Feedback is a technique used to enhance the objective performance of an amplifier and almost all products use it to some degree.

However, various products with zero-feedback exist, such as the Enleum AMP-23R and many people subjectively enjoy or even prefer these designs. The HM1 offers the user a choice. It can run pure Class A with no feedback at all, or it can run Class A with feedback enabled, providing excellent objective performance (full measurements coming!).

The HM1 can also can serve as a preamplifier, offering both balanced and unbalanced I/O on the rear with two separate inputs, and a single output. Not only can the two inputs be independently switched on/off via the A/B controls on the front of the unit, but they can also be mixed together, allowing for two sources to be played back and mixed at once. 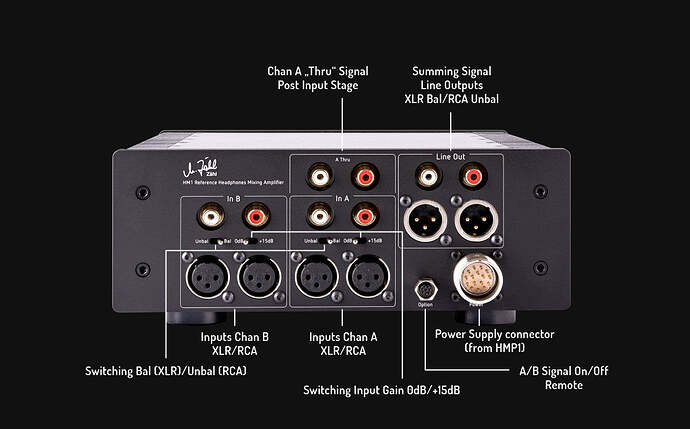 I personally have found this quite useful as it allows me to have my primary playback chain and DAC input to the ‘A’ input, and a separate DAC connected to my PC going to input ‘B’. This means I’m able to play music bitperfect or at a higher sample rate through software like HQPlayer to my main DAC, whilst still being able to hear windows system sounds, voice chat and other tools via the second input.

Another ‘extra-mile’ design element is hidden within the volume controls themselves. When either volume knob is turned down to minimum, a relay shuts off that input entirely to prevent any noise or residual signal level coming through and keep things absolutely silent. This is done via the use of a linear TKD potentiometer in a logic circuit, attached to the logarithmic TKD potentiometers being used to adjust volume. But Michael Zähl did not just put this linear pot onto the end of the balanced pot, oh no, that wouldn’t be good enough. Instead, the volume pots are modified to separate the left and right channels, and have the linear pot physically in-between them to provide just that little bit of extra channel separation. Cool stuff!

This wasn’t something mentioned anywhere in the product page, just something that Michael told me about directly. So I wonder how many other interesting design aspects such as this might be hidden in the HM1?

On the front of the unit, there are five other knobs besides the volume adjustments, which control various sound adjustment features. I’ll talk about these a little later on, but do want to quickly mention that these can be bypassed entirely (not just disabled) using the ‘direct’ buttons beneath each input selector. 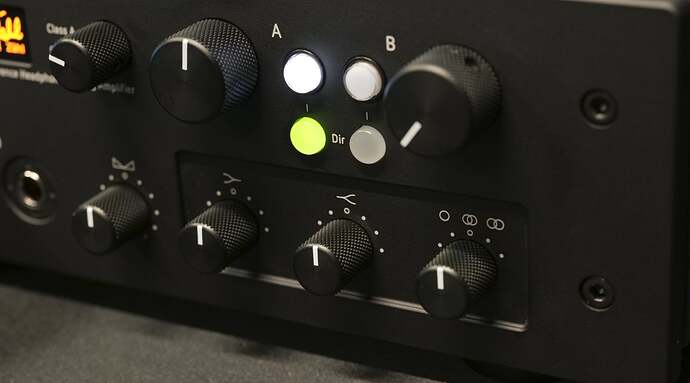 Many high end headphones have reputations for being very hard to drive, or requiring powerful sources to sound their best. Given the most certainly high end pricing of the HM1, performing well here is a requirement.

The first headphone I tried with the HM1 was the Hifiman Susvara. A headphone which in my experience can sound somewhat soft on an underpowered amp, but can become very punchy indeed when powered properly. 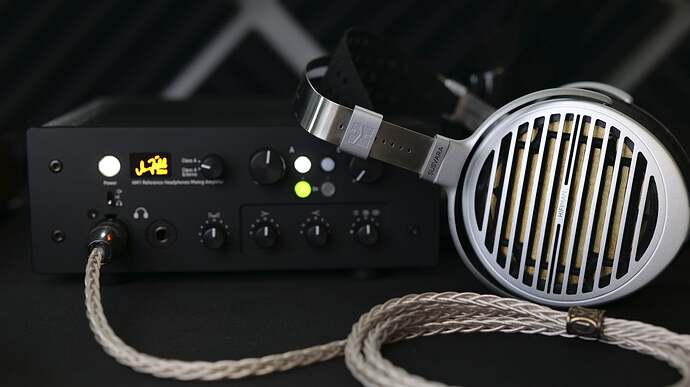 This is my benchmark for whether an amplifier can really drive a truly hard-to-drive headphone with precision and force, and the HM1 doesn’t just do it well, it does it better than any other amplifier I’ve heard. The only other source I’ve tried that matched the level of dynamic impact Susvara showed through the HM1, was the Benchmark AHB2, a speaker amp capable of 100W @ 8 Ohms (25W @ 32 Ohms) with some very impressive objective performance to back that up. The HM1 sounded completely at ease with everything I threw at it from the Abyss 1266 to the Raal CA-1A. It hits hard, never gets congested, and does it all without so much as a hint of fatigue. This amplifier powers anything you can plug into it without any trouble. Not just getting things loud, but delivering a better sounding result than other very powerful amplifiers like the Holo Bliss or Ferrum OOR.

The ability to enable or disable feedback error correction is quite unique and I’m not aware of any other products which offer this.

(By the way, if you’d like to learn a little more about how negative feedback works, this link is a good place to start!)

I expected that I would have a preference for one or the other, but to my surprise, it was almost entirely headphone dependent. Some headphones are sounding better on Class A (1266, Atrium, HD800), some sound better on Class A & Servo (Susvara, Caldera, CA1A).

With feedback disabled there is an increase in body to most elements. An overall subjectively warmer presentation with a little more ‘meat on the bones’ to borrow a description from Torq. There is a small reduction in detail, but incredibly minor and the main factor as to whether you will like one mode or the other will simply be whether the faster, more neutral presentation, or meatier and warmer presentation fits your preferences and/or your headphones best.

With feedback enabled, this amp exhibits absolutely no colouration that I can detect (other than when the user deliberately adds some which we will talk about in a moment). It’s perfectly neutral, but never clinical or lacking in other areas such as soundstage or timbral accuracy.

It’s honestly a little tricky to write a description for sound because I’m struggling to find anything here that thus far, is not being done exactly how I’d want it to be. This is as close to perfect as I’ve heard.

In addition to changing the mode of operation for the amplifier, the HM1 has four sound adjustment options, all of which are done entirely within the analog domain:

The first three are quite self explanatory.

Left/Right Balance adjusts the relative volume of the left/right channels, allowing you to correct for any minor imbalances within the headphones or your own hearing, and keep the presentation centered.

Bass and treble shelf EQ allows you to quickly make basic tonal adjustments to suit your preference or correct a mix that may have been produced/mastered in a not particularly neutral way.

But the truly unique feature is the stereo base adjustment. This can best be described as a ‘soundstage knob’. 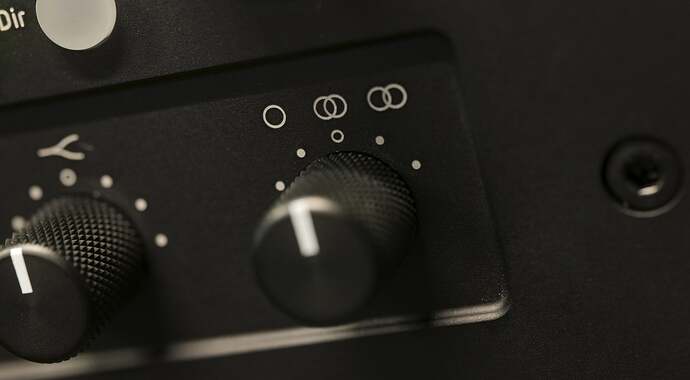 Many other products have a feature called ‘crossfeed’, which feeds some of the signal from the left channel into the right and vice versa, just attenuated and with a small delay, to simulate the effect of listening to a pair of speakers in front of you.

The HM1 is using a more advanced technique with quite a different effect. This is an analog domain mid/side comparator, which looks at what parts of the signal in the left and right channels are similar vs different, and only adjusts the amplitude of the differences.

This means that whereas crossfeed typically moves things out in front of you but does not actually make things sound ‘bigger’, the stereo base adjustment on the HM1 simply widens or contracts the soundstage itself. It can make the mix sound larger than it already is, or can collapse it to mono.

I found that for every track I listened to there tended to be a position for this adjustment which sounded ‘correct’. Sometimes this was leaving it untouched, sometimes this was a notch or two wider or narrower. But the ability to adjust this on the fly and in such a well implemented way was nothing short of a transformative experience.

Whilst the sound quality of the amplifier itself is incredibly impressive, the featureset and adjustments it provides are really what make this special. The ability to quickly optimise the presentation of any track to whatever headphones I’m listening on at that moment is fantastic and I’m going to find it quite difficult to go back to listening on regular amplifiers after this.

What makes this even more impressive is that absolutely everything the HM1 offers is achieved entirely through analog circuitry. There is no digital processing, all logic circuits are analog, all power supplies and related circuitry is linear with no high frequency switching components at all.

In fact, the HM1 doesn’t even have a remote yet! As this would typically require the use of digital components. There will be an analog remote, but it will be wired and connect via a currently vacant port on the rear of the unit to preserve the analog-only philosophy.

A full review with more in depth thoughts is on the way, but for now, I can’t wait to listen some more….

This is a companion discussion topic for the original entry at https://headphones.com/blogs/reviews/zahl-hm1-first-impressions
2 Likes
charkeski December 15, 2022, 6:34pm #2

“DC transmission loss”? Huh? There’s absolutely no difference between AC and DC at low voltages over a short distance. Long distance HV transmission actually has less loss using DC, but grids stick with AC so they can easily step the voltage up and down. The only thing that matters is that final voltage regulation happens close to the components.