It’s no secret that currently Chinese brands are producing some of the best value products in the in-ear headphone (IEM) space. This segment is a growing trend that’s highly competitive, and Moondrop is a brand that’s known to be at the forefront of this wave.

But up until now, these well-regarded IEM-centric brands like Moondrop haven’t had product releases with the same acclaim or recognition of value in the over-ear headphone space. That’s not to say they haven’t tried, with brands like Thieaudio, Goldplanar, HarmonicDyne and others coming out with headphones that have been met with mixed reception, depending on where you look for information. I suppose you could consider HiFiMAN, a well-established over-ear headphone brand also based out of China to be the exception, but they’ve been making them for years and aren’t really part of this new wave in the IEM space.

The thing is, when you spend a lot of time evaluating the IEMs, you realize they’re all so much better than IEMs used to be with a lot of deep understanding of what goes into making amazing sounding products behind them. It makes it easy to see why there’s so much hype behind these products. Because of this… everyone paying attention has been waiting for them to make a truly successful jump to over-ear headphones. In my view, the Moondrop Venus is going to pave the way for this jump to happen.

Measurements done on an upright GRAS 43AG with RA0402 coupler and KB5000 pinna. 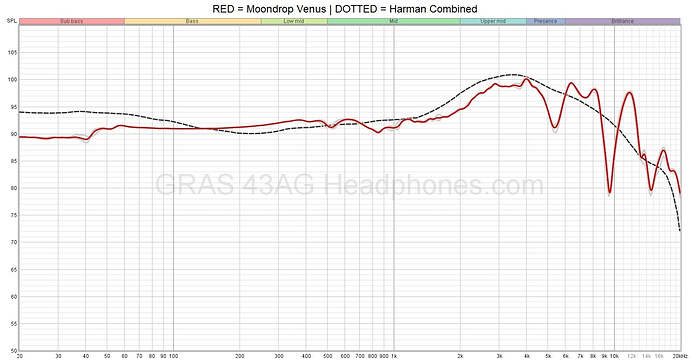 You can think of the Moondrop Venus as being mostly neutral with just a hint of brightness or upward tilt to it. In many ways the tuning is ‘HiFiMANesque’ in the sense that it’s got a good amount of ear gain, which is the region amplified by the physical ear, and why you see the frequency response rise up in the raw graph.

The bass is subdued, but well extended, which is a common trait of large diaphragm front-sealed open-back planar headphones like these ones. Driver mode issues or ‘wibbles’ in the mids you sometimes see are kept under control here - not something that’s necessarily going to be better or worse but it sure makes the graph look nice. Then you get a midrange and upper midrange tuning that’s not that unlike what you get with the HiFiMAN Sundara (2020 version). That means… no shoutiness or glare to vocals! Hooray!

This is also aided by a slight emphasis to the treble. But this is also where the Venus gets into trouble a bit. I can only really describe the Venus’s treble as a bit ‘splashy’ or ‘zingy’, as it ends up having a bit much presence above 10khz. But once again, this isn’t all that dissimilar from many well-regarded HiFiMAN headphones.

For subjective remarks about intangibles, I find the Venus to also be… decent, that is to say, not the last word in incisiveness or technical capability, but certainly reasonable and competitive for the price point. I think a good comparable is actually somewhere around the Edition XS, just maybe not quite as wide for the staging. It’s also not a particularly intense or ‘slammy’ kind of sound like what you get with the Focals, but once again I’d point to the familiarity of the HiFiMAN models for these qualities. Not in all aspects, but in some.

Overall, I find the Venus to have a sound that’s very well done, and competitive for its price point. It has a highly competent tuning free from any major harmonic imbalances or weirdness to the sound signature, leading to a pleasant and natural - if a tad bright - presentation but one that most people should be able to get on board with.

So the Moondrop Venus has some minor quirks and some may be put off by the slightly leaner presentation overall. But, I can confidently say that out of all of the recent releases to come from the Chinese manufacturer IEM-centric brands, this is the most solid one so far. To me, it’s also an indication that this wave has now arrived in over-ear headphones, with Moondrop setting the standard. Regardless of how the Venus will be thought of in the long-term, I have to imagine things are soon going to get very competitive in the over-ear headphone space because of it.

This is a companion discussion topic for the original entry at https://headphones.com/blogs/reviews/moondrop-venus-first-impressions-and-measurements
6 Likes
General purchase advice: Ask your questions/for advice here!
Index / collection of measurements made by Resolve
Resolve November 10, 2022, 4:55pm #2

I just wanted to add another note here regarding the driver. The resonance frequency when decoupled is nice and low and the high Q (narrow) Fs peak you see in the bass means there’s also little to no driver damping. 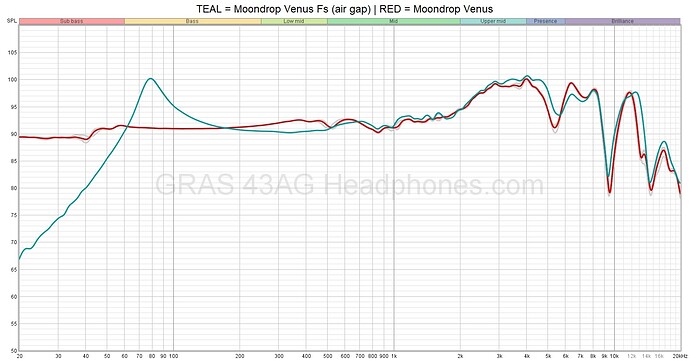 The nice thing about this is that when the seal is slightly compromised through eyeglasses with thick arms, or for whatever other reason, the bass won’t drop out entirely. Instead you’ll actually get a bit of a boost to the bass (to to the degree shown here), depending on how much the seal is compromised.

This isn’t to say damping or higher Fs is a bad thing necessarily, just something interesting to note about the driver choices here.

“Not overly hard to drive” is not what I was expecting based on the rated impedance and sensitivity numbers.

@Resolve graciously let me briefly listen to the Venus last night. Had it coming off the Bakoon Amp-13r. It’s a pretty competent sounding headphone. Not my cup of tea as its too bright for my personal preference. Resolve’s description of splashy kind of nails how I would describe the treble. Not piercing like Beyerdynamic but fatiguing in a different way for me.

Build and comfort feel pretty solid overall. Resolve has a giant audiophile head while I have a regular head so I had no issues the strap pushing down on my head. Only time will tell how the build will hold up over time.

Seems like a solid contender for people that want Hifiman but different. I don’t think it displaces anything in the market (Edition XS is still a fantastic option at its price) but just a solid addition that allows for additional choices.

Based on my impressions, I give the Venus a reserved thumbs up. It’s not for me but I recognize that a lot of people will probably enjoy them.

“Not overly hard to drive” is not what I was expecting based on the rated impedance and sensitivity numbers.

FWIW I listen to the Utopia 2022 daily on the Bakoon in high gain (switching gains is too much work) and only go up 1 notch on the volume. Went up 5 notches on Venus.

Yeah it’s one where you’d want an amp but not like HE-6 levels of picky.

sounds promising! Looking forward to their E-stat also, and seeing how it stacks up.

Very interesting. @Resolve would you say the upper treble to be Sundara-like or more Edition XS/Ananda/Arya like? I’d guess it’s more like the egg-shaped HiFiMen.

More edition XS like. But still not exactly the same.

Thanks, that helps provide context. Now if only Hermes delivered my own review unit!

It is certainly a headphone that has peaked my interest. Hopefully I will get to hear it at some point.