This is the thread to discuss the Astell&Kern x Empire Ears Odyssey In-Ear Monitors collaboration. 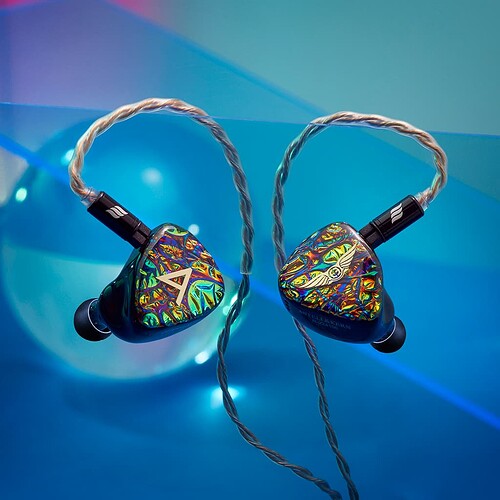 The all-new EIVEC MKII engine was developed specifically for Odyssey to ensure optimal timing, phasing and control between the electrostatic and bone conduction drivers – a monumental achievement.
Empire Intelligent Variable Electrostatic Control – EIVEC - is Empire’s approach to incorporating electrostatic EST drivers into IEMs. For all the incredible range and resolution, electrostatic drivers are notoriously hard to control, often overpowering other drivers. EIVEC is our solution to that, and the degree of control provided by EIVEC is so precise that the electrostatics can operate independently, performing disparate tasks within the sound stage to deliver layer upon layer of detail and texture for unparalleled performance.

Personally, the Odin is my all-time favourite IEM but I wished it had a tad more bass. It looks like the Odyssey may be that IEM. Excited to try it out at CanJam this weekend!

Has anyone measured the FR or heard these yet? I’m very intrigued. Like Taron, I love the Legend EVO, but sometimes wish it had a little more clarity in the mids and highs like the Odin. This may be the best of both worlds.

If anyone could post any concrete info on these IEMs it would be very appreciated. I’m genuinely interested, but not trying to drop that kind of money on something I have literally NO information on.

I have these on pre-order, but my IEM experience is very limited and I am nervous about potential fit issues.

Someone in the “favorite IEMs” thread made a comment that they, and several others with them, couldn’t form an opinion at CanJam (I believe) because they were too big, uncomfortable and couldn’t get a good seal. They supplied a pic of their massive IEM tip box they brought with them for testing.

My highest end IEM at the moment is the ThieAudio Monarch MkII. This IEM is kind of at the limit for me on fitment tolerance for listening for a length of time. It is a tribrid and on the chunky side itself, but I’m not sure how it will compare to the Odyssey.

The only reviews I’ve watched and read are by Moon Audio and one by Bloom Audio. Both pretty much made it seem like the best of both the Evo and Odin. Neither complained about their size.

Since these are a limited run and likely to sell out, I staked my claim. I suppose I can either return them or resell if I can’t handle them.

I also hope they are a noticeable increase in performance over my Monarch’s considering they are 3.5x more expensive!!

I’ve owned the Monarch, and can tell you with confidence that the Legend EVO is bigger than Monarch. By all accounts the Odyssey is at least as big as Legend EVO, so if Monarch is already verging on too big for comfort for you there’s a good chance Odyssey will be problematic. THAT SAID, I personally struggle with the size & comfort of Legend EVO, but so far I’ve been inclined to just get used to it because the sound is actually good enough to be worth the effort. YMMV.

Thanks for the reply!

I think I am going to still get them and worst case return them. If, after a good while they just don’t work for me, I would guess the resale market should be decent enough since they are a limited run.

I personally struggle with the size & comfort of Legend EVO, but so far I’ve been inclined to just get used to it because the sound is actually good enough to be worth the effort

How long would you say your listening sessions are? Or, how long before you can no longer bear it?

I generally wear them on my commute or at the gym or when traveling, so very seldom more than a couple of hours. It’s not so much that they “hurt” per se as that they are just so darn big they lose their seal sometimes when I move my jaw or even just when I’m walking and I have to readjust them. Now that I’m thinking about it it’s really more the nuisance of the size than any actual physical discomfort. But everyone’s ears are different.

Give it a shot. You may find, like I have, that the extraordinary sound quality is worth the nuisance. And if not, I doubt you’ll have trouble selling them.

It’s not so much that they “hurt” per se as that they are just so darn big they lose their seal sometimes when I move my jaw or even just when I’m walking and I have to readjust them.

This makes sense. I find this seems to happen with almost any IEM for me over time, but understand how the size/weight will likely increase the frequency. So, great info and not something I really thought about until you mentioned it.

For instance, my Monarch’s seem to do this (need adjustment for seal) more frequently than my Moondrop Starfield’s. So, I imagine the Odyssey will likely have it happen even more frequently.

Hopefully it’s not so often to deter me from using them. But, like you said, I’ll likely be able to offload them fairly easy if it becomes too much.

Getting close to shipping! I believe they are supposed to release on Monday the 14th, so hope to have them the next day whenever they ship (1-day shipping).

I just wanted to do an impressions post on this one, as I got a chance to hear it at CanJam and then spent some time with it once we got it in to check out.

The A&K x Empire Ears Odyssey to my ear sounds like kind of a cross between the Odin and the Evo, but with a bit less ear gain. There are definitely some colorations going on with the tuning, but ones that may be enjoyable for a particular kind of flavor.

The Odyssey has massive, powerful bass that’s also very detailed and well-textured. I do hear a bit of an odd… resonance effect in the midrange at times, only in certain quieter moments. I wonder if this is to do with the bone conduction driver and the way it affects me. Regardless, I think of this as a ‘quirk’ that’s common with these high end Empire Ears IEMs, as the Legend Evo had that too.

For the rest of the tuning, it’s not bad, with a slight shift towards mids instead of the treble, not unlike the Odin. I had previously characterized that style of tuning as having a kind of ‘bloom’ to the upper midrange. This is great for piano recordings or acoustic guitar, as it has a tendency to pull those instruments forward in the mix.

With the treble, I do hear a bit of unevenness or quirkiness, in particular in the lower treble. This is where things get a bit weird with different HRTFs of individuals, so this is definitely going to be listener-specific. To my ear, there’s an emphasis around 6khz that gets to me a bit.

For the other subjective ‘intangibles’, the Odyssey is more than competent, delivering the expected Empire Ears flagship level of performance. Soundstage has a lot of depth, tones are well-defined and textured, and the bass hits like a truck. I do wish there was a bit more ‘air’ and openness up top, but apart from that the ‘technicalities’ are on point.

Here’s the Odyssey’s frequency response relative to a smoothed version of the Thieaudio Oracle MKI which is my neutral reference point (we’re still working on an IEM target). Keep in mind this is done with the official GRAS RA0402 coupler, which doesn’t have the coupler resonance in the treble.

You can see some of the quirkiness in the mids there, but that may also just be a measurement artifact, as it changes completely depending on the seating. Still, there is something audible to my ear in that range when I do a manual sweep.

So, bottom line for the Odyssey? In my view this is one to consider if you like a warm, rich, mid-centric tonality. Those looking for a more neutral presentation should probably consider the Odin instead, and while I appreciate the more relaxed upper mids on the Odyssey, I think I still prefer the Odin’s tonality for the kind of music I’m into. But for those who thought the Odin was too bass shy, the Odyssey should be on your radar, and I do think it’s an improvement on the Evo.