What’s in the box **Tubed Edition**

I have been enjoying my 1954 Amperex long plate slanted D foil getter 12AX7s in my Quicksilver all week. They have lived up to the hype in my opinion. The combination with the GE oval gray plates 6BQ5s (from Kentucky Ken Rad factory) is so nice that I haven’t even rolled in my 1955 Mullard disk getter EL84s yet. There’s always tomorrow! 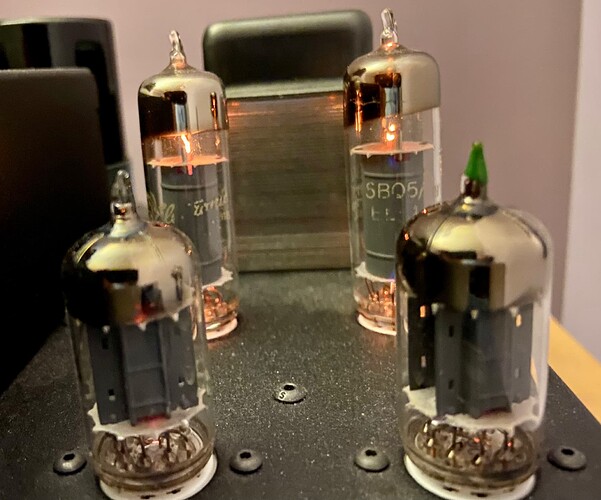 Wouldn’t think too much would be available in those parts given the circumstances.

Looks like a great tube rolling stash to experiment with. Congrats.

Are the “military” 7308(s) are for use in the Folkvangr? Those can be on the pricey side.

Thought I’d get a set on the high side of what I’m willing to spend. See if I can tell a difference between the low, middle, high priced tiers.

I’m predicting…no. I don’t have the most discerning ears but we’ll see(hear).

Hi guys. These Sovtek (NOS) seem to be real heroes in my tube line up for my WA 22.
They have great authority in presence. 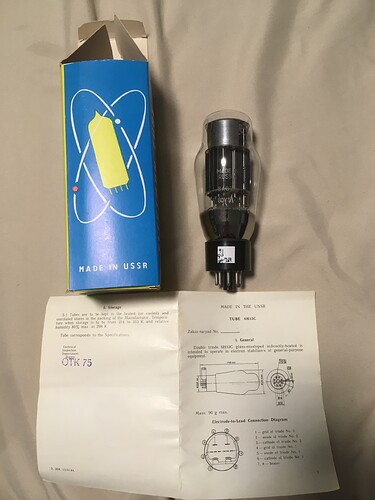 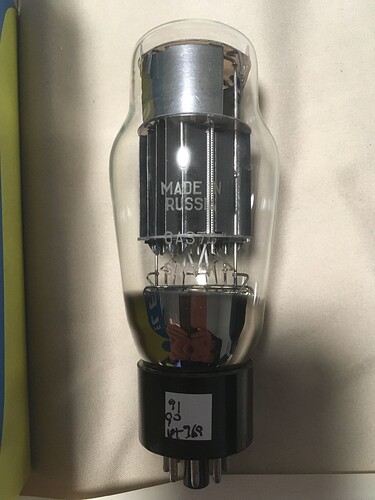 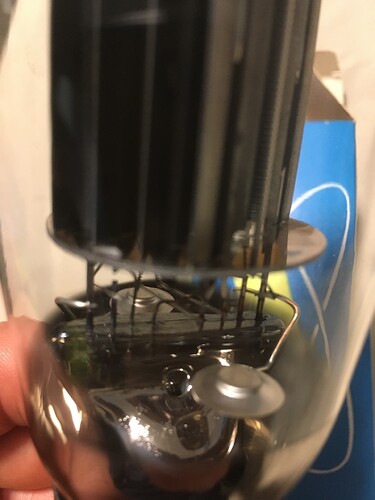 You know I gotta say that is really awesome, brother.
Tube glory heaven. So let me ask you something. Are you loving the FolkVangr right off the bat or do you need more time with it? 10 tubes to burn in a bit I would understand if the Amp didn’t grab you right away.

Also. I wanted to show you my retro photo of my tube glow with the WA 22. I’m having so much fun as well. Glad I found this thread. 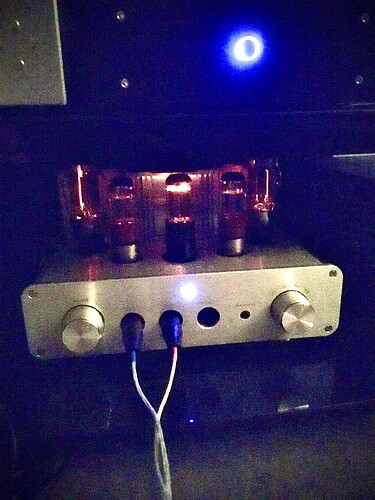 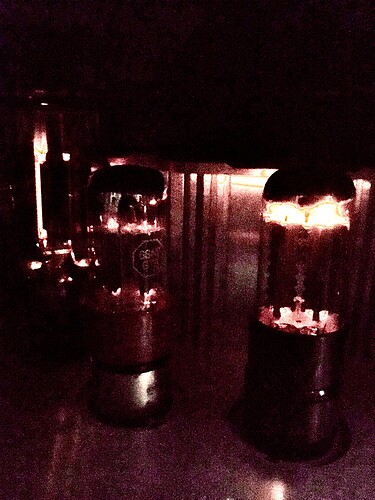 Awesome man! Look forward to hearing how it’s going with your Woo. Always hear great things about them!
As far as the FV, posted my most recent comments here… TLDR, just getting better!!

@AudioMaine have you got your Folkvangr yet? Curious what others think of it and what headphones anyone’s tried. I really really like 800s with it. As we’ve discussed elsewhere about burn in… I don’t know if I’m just acclimating to them or the tubes are changing but it seems to be getting better. Spent the last couple nights listening to… [image] And [image] I won’t ramble on in detail about either of these albums. Very different albums obviously but with the Hd800s they were both just so… 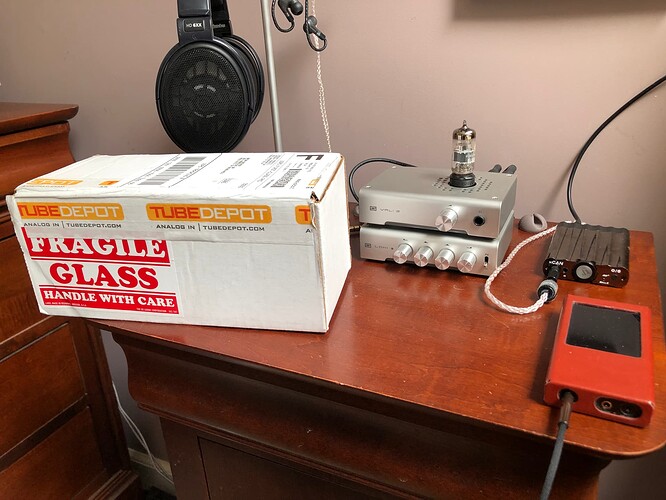 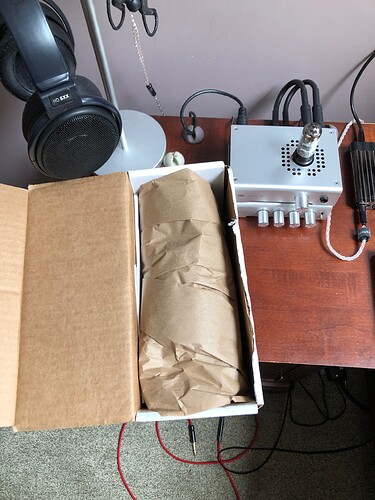 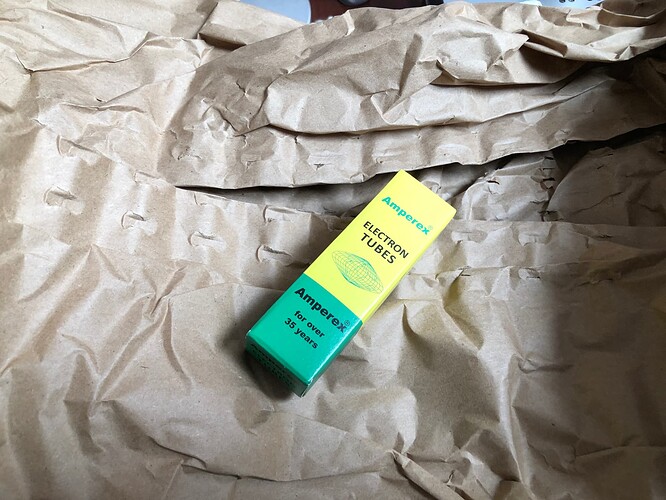 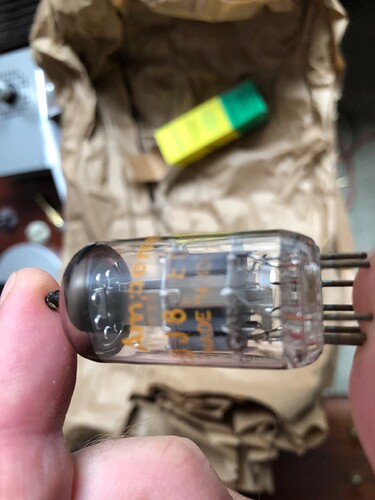 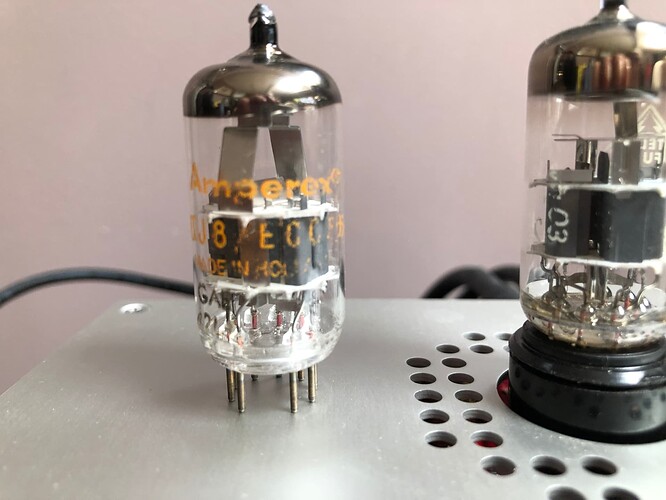 I don’t have Folkvangr, but I have a few years experience with Valhalla. “Foton” 6n6p driver tubes are a small but noticeable upgrade from the stock JJs. When I upgraded, I heard more defined transients and increased dynamic definition. For the input tubes, I recommend Siemens E88CC - they are pure magic. Half the reason I am considering a Folkvangr is because I already have the Siemens and really wonder how they would sound with a lot more power behind them.

I picked a couple lots of 6n6p not in hopes of upgrading but to just secure a supply that will last me awhile. 1 was a case from Ukraine that are all coded from 1973…seem legit and seller seems well regarded. Another batch of 12 from VivaTubes… think they’re more current production. Haven’t looked at the codes yet or tried any of them yet….too soon.

May look into the “foton” type. See what I can find.

I did get a pair of Mullard E188CC 7308 Gold-pin from Brent that I just put in last night to try out. Looking up the ones you’re talking about seem like they’re right in the same ballpark price wise….not cheap😬 I think I’ve heard praise of the Siemens before. So I keep those in mind as well…maybe see if Brent’s got any.

I don’t know man, it’s really my first serious foray into tubes, so I can’t really compare it to anything. Plus it’s still super new but I do really really like the 800s on this thing.

I know you have the VC, so that would probably be a great pairing. The Arya I didn’t really like but again, it was very brief and the amp/tubes were a couple hours old. I’ll be coming back to those eventually. I don’t have any ZMF or Grado (yet) but both are supposed to synergize really well.

You do have a badass amp in your very near future but I hear you… curiosity’s a MF!!! Haha

Not trying to sway you one way or another but I don’t think you’d have any difficulty unloading it if you did pick one up. They are also a couple months out at this point though too

I don’t know who originally posted this idea (somewhere on the forums here) but it works really well for smaller tubes. Labels under them to keep track of their test values… 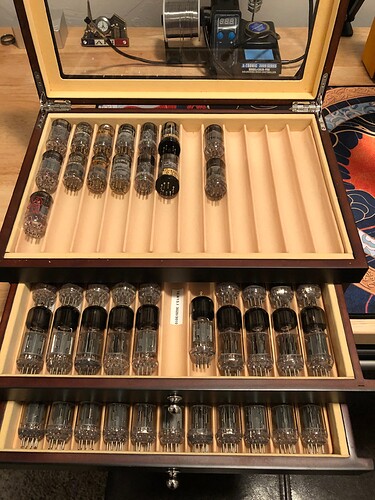 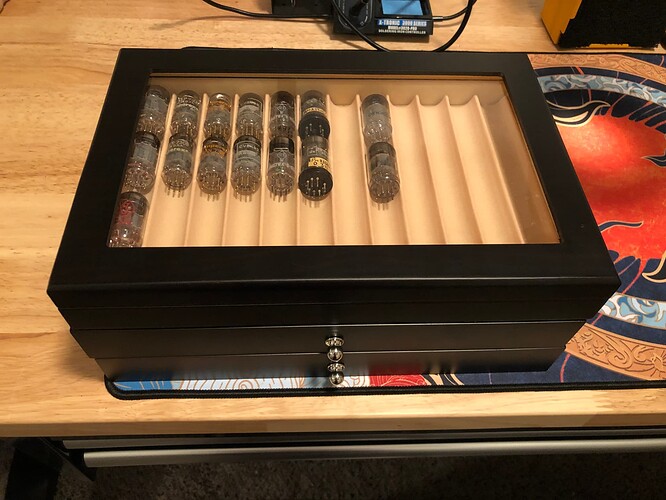 Here’s a dumb question though… What is that? A poker chip thing? I can’t really figure out its original use.

That’s a really nice setup. I keep mine in tube boxes inside a large pelican case. Your method allows much better ability to see what you have. I’d need several of those containers.

That was me, originally. No, in fact, some pen display cases aren’t large enough for the miniature dual triodes. Something like a 12SL7 would be happier in something like a watch display case, with the band cushions taken out. They come in many of the same form factors as the pen cases, thankfully. But I would look at the measurements to be sure they’ll fit.

I have lots of dual triode novels, medium octals, and 1626 large octals. I’m sure the large ones would be a tough fit in even a watch display case.

Thanks for the reply. 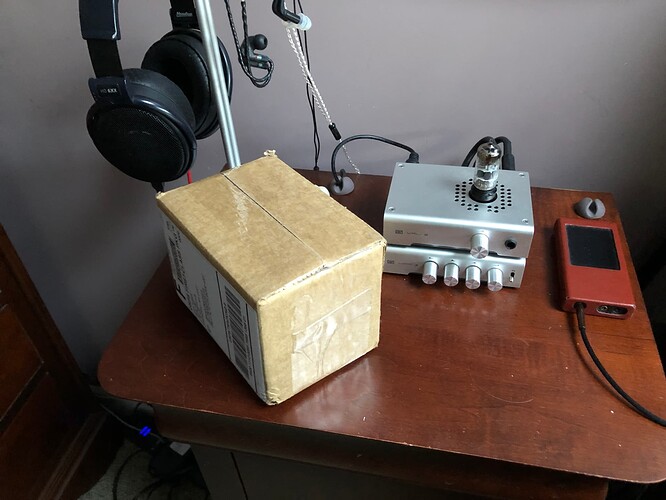 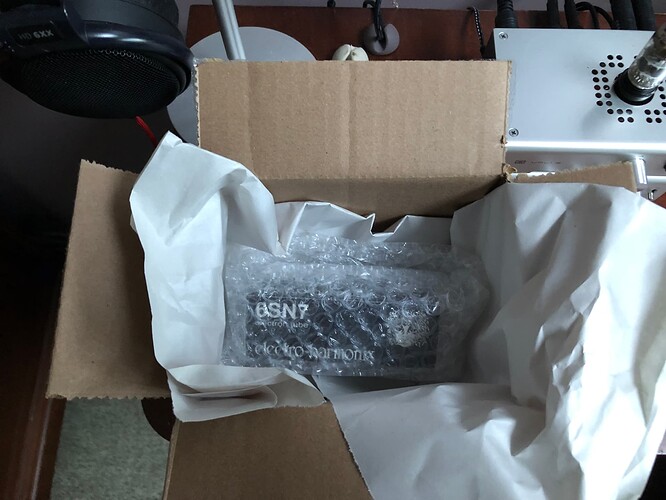 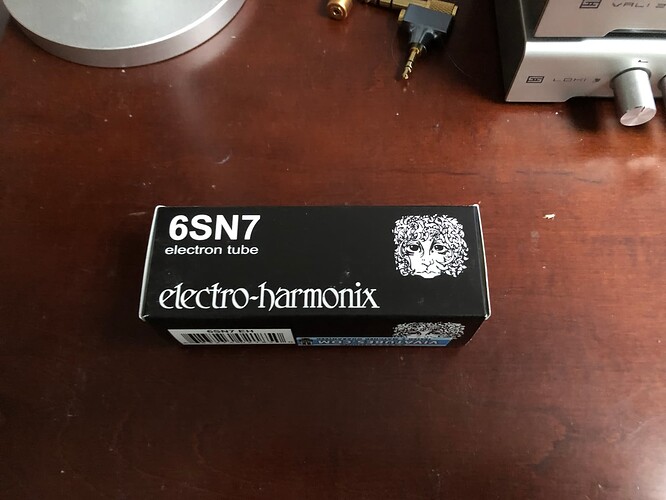 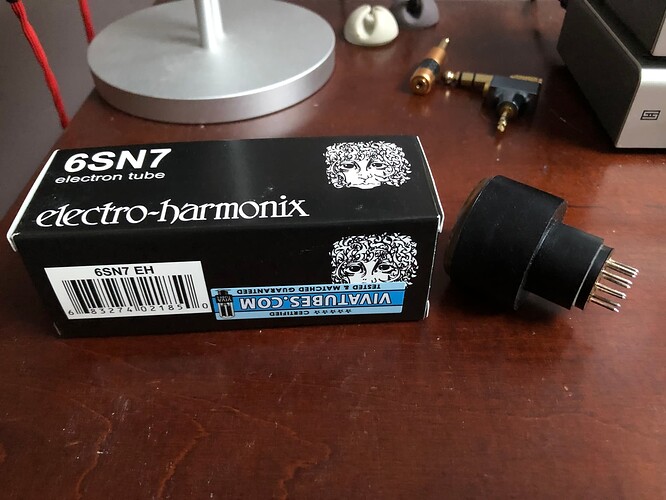 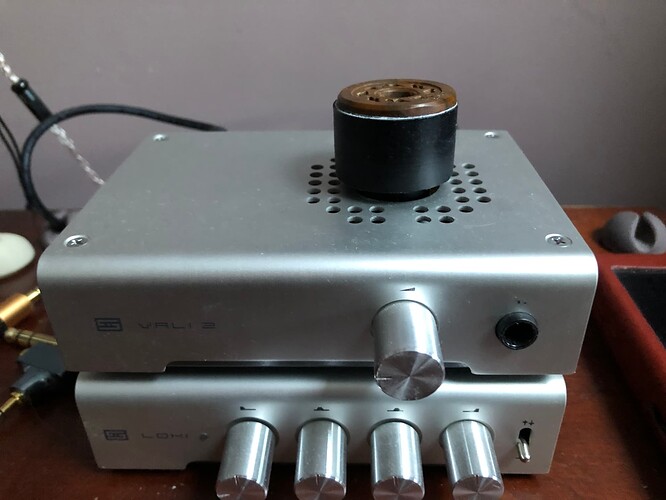 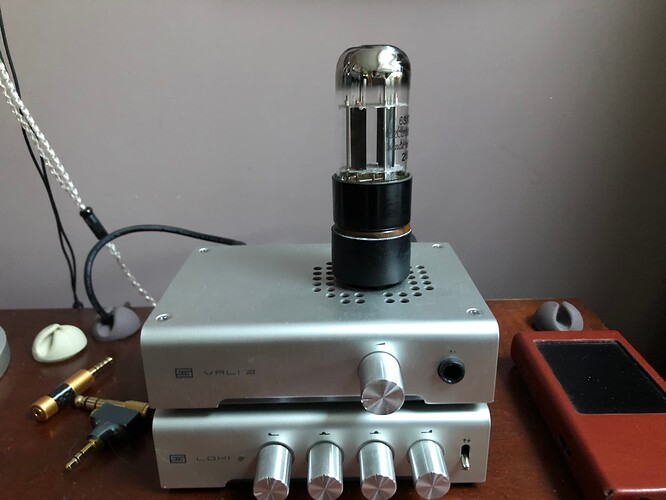 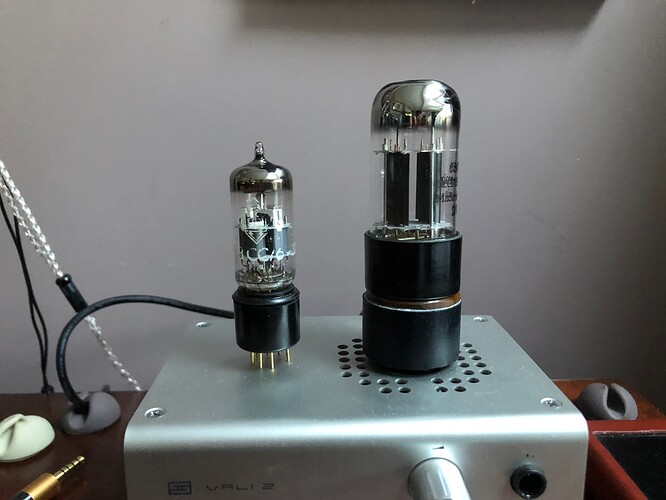 Since this thread hasn’t seen any traffic recently, I thought it would be appropriate to post today’s arrival. 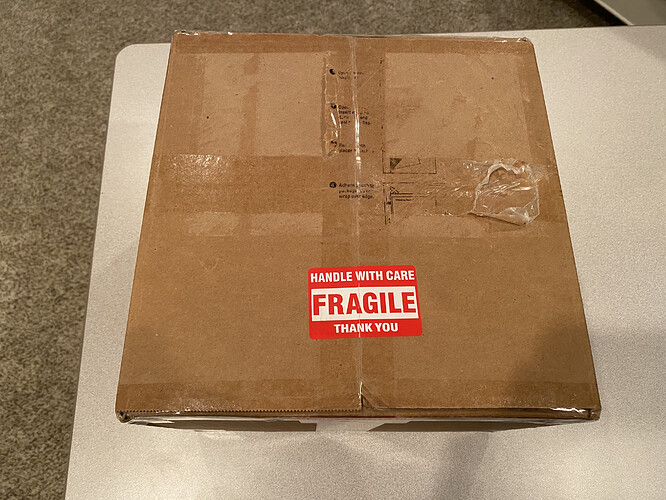 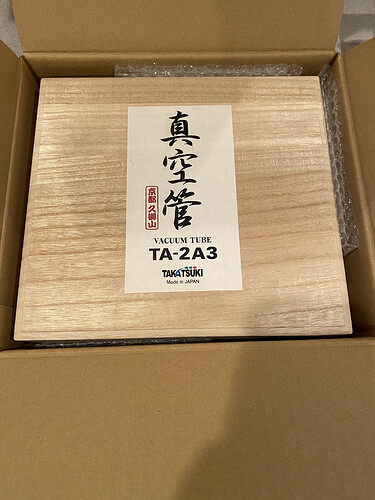 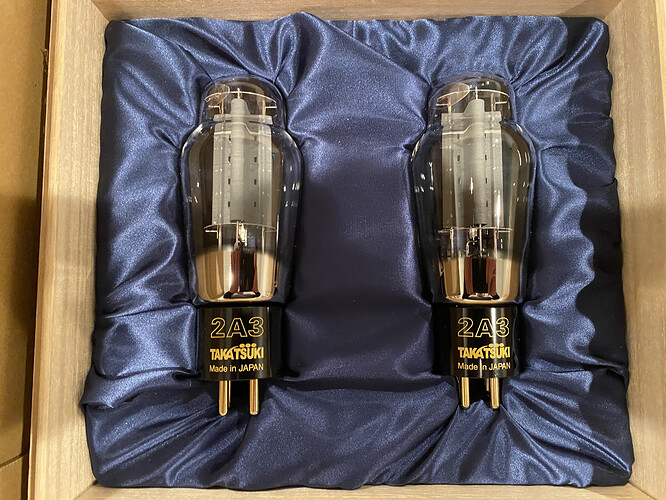 Sorry, not much glow in a daytime picture… 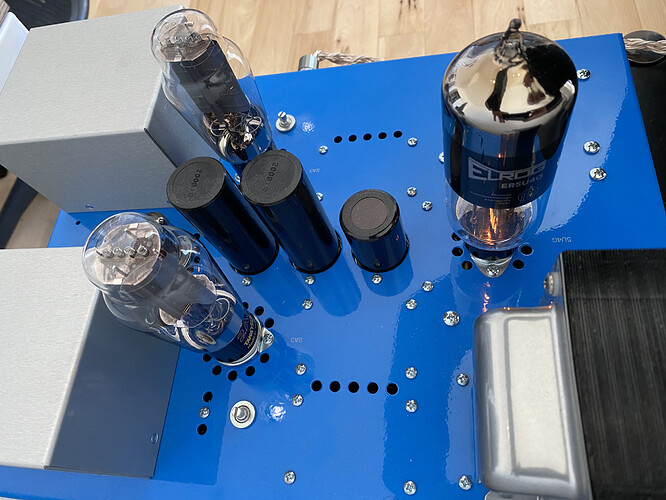 Duuuuuuuude! That’s a possible “final” configuration I may be pursuing. Can’t wait to hear your impressions! And congratulations!

Very nice! Hopefully they work out for you. I really enjoyed the Tak 274b rectifier in the wa33. These definitely could be the endgame for many

Me too! Can’t wait to hear her how good yhrr E y are especially to the acmes!