The world of rock has lost another legend

I met him and interacted with him a couple of times a few decades ago. He was cool, with no attitude. Just a guy who played guitar really, really well.

May he Rest In Peace.

He basically invented the rock guitar sound of the 1980s. Everyone wanted to play like him. No small achievement and hugely influential.

I’ve seen him many a time, what a guitar player, but unfortunately each time I saw him, he was chain smoking on stage. Cancer took another entertainer.

From Sammy Hagar " Sammy Hagar recalled the “craziest songwriting experience” of his career as he worked on the lyrics for Van Halen track “Best of Both Worlds” in 1986.

The new-recruit singer wasn’t enjoying the experience of working with Eddie and Alex Van Halen in their 5150 Studio, due to the fact that both brothers were chain smoking throughout the sessions, as he told Uncle Joe Benson on the Ultimate Classic Rock Nights radio show.

“Eddie would light his cigarette, take a hit off it, put it in his guitar and let it just burn down to nothing,” Hagar said. “By the time we’d finished the song he’d have to light up another one, and he’d set it down. Al was the same – playing drums and blowing smoke. We had this little low-ceiling studio, 5150; it was really pretty rustic. I would come home, midnight, one o’clock in the morning, and I would stink so bad with all my long hair – hair just absorbs cigarettes – and my clothes.”

NEW YORK (AP) — Before Eddie Van Halen agreed to add a guitar break to Michael Jackson's “Beat It,” one of the most famous cameos in rock history, he had to be sure the phone call from producer...

How did you meet him? Sounds like an interesting story.

Sad. Sad. A lot of music greats have left us in the last year.

If everyone had to pick just one favorite track from Eddie, what would it be?

Collaborative playlist - in honor of EVH, add one track here!

EVH - favorites, a playlist by tjg on Spotify

It was through work, nothing exciting. Just a job I had at the time.

Yes, my wife broke the news to me - she was quite saddened at the news. So was I. Before replying to this thread, I went to search some of the best Eddie Van Halen music videos. I remember so many of them. But I’ve got a poor attention span, and my YouTube feed includes some ping-pong coaching, as I enjoy playing that. So I ended up watching these 1st graders. I don’t think Eddie would mind.

Will be spinning 1984 in his honor.
What a killer album!

If everyone had to pick just one favorite track from Eddie

There can be only one memorial song for Eddie Van Halen (not the band): Eruption from Van Halen I. That song ranks in the top 5 most influential guitar rock songs of all time. The album (half Eddie and half David Lee Roth) led to Hair Metal in the 1980s. However, Eddie’s speed and tapping technique led to 1,000,000 imitators and the technical direction of many metal sub-genres.

(My top 5 most influential guitar rock songs: Kinks You Really Got Me, Jimi Hendrix All Along the Watchtower, Led Zeppelin Stairway to Heaven, Van Halen Eruption, and Nirvana Smells Like Teen Spirit. Each one started a new era.)

As part of a much longer, later live solo and skill showcase:

Hendrix’ cover of Dylan’s Watchtower is one of my favorites. Ditto the Kinks, and of course Eddie. I lived through the overplay of Stairway.

So last night, I let ROON radio give me a Van Halen selection. I had to laugh.

I had to laugh.

One might think that the copyright owners are directing listeners to mediocre content in order to reduce royalty payments for the top hits and increase the popularity of the deep catalog. They wouldn’t, they couldn’t, be so cynical?!?! (Thick sarcasm for those who didn’t live through the Major Label era).

If everyone had to pick just one favorite track from Eddie, what would it be?

Not sure about favorite song, but this was always a standout video. The credits at the end are icing on the cake.

Eruption is fantastic and iconic, but Eddie had so much to offer that one memorial song just won’t do for me to honor the man. 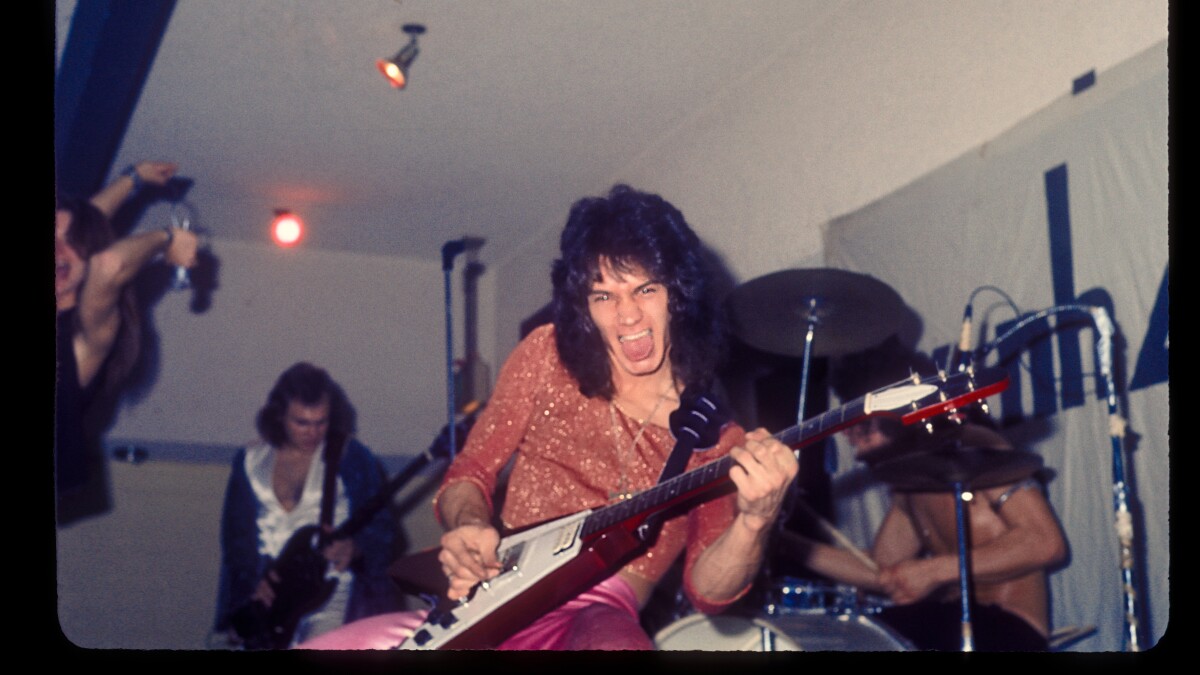