What are the preferred pairings for the Utopia 22?

Great seeing you all today at the Can Jam After Hours!

My stars for this show were the Dan Clark Audio Expanse, Utopia 2022 (on Solid State amp), AmpandSound Nautilus, and surprisingly, the Kennerton Rognir Closed-back planar that Ali brought the After Hours. I was surprised how good that was.

I was disappointed with the ZMF Caldera, which I don’t think sound as good or lively as my Audeze LCD-3F or the Rognir, and at least with the 2-3 setups I’ve listened to, the Hifiman Susvara and Shangri La.

System synergy is important, of course, and I would give them another chance. Even my LCD-3 faltered on several system.

I’m still contemplating whether or not to trade up to the LCD-5 with that $2000 off deal. What do you guys think? 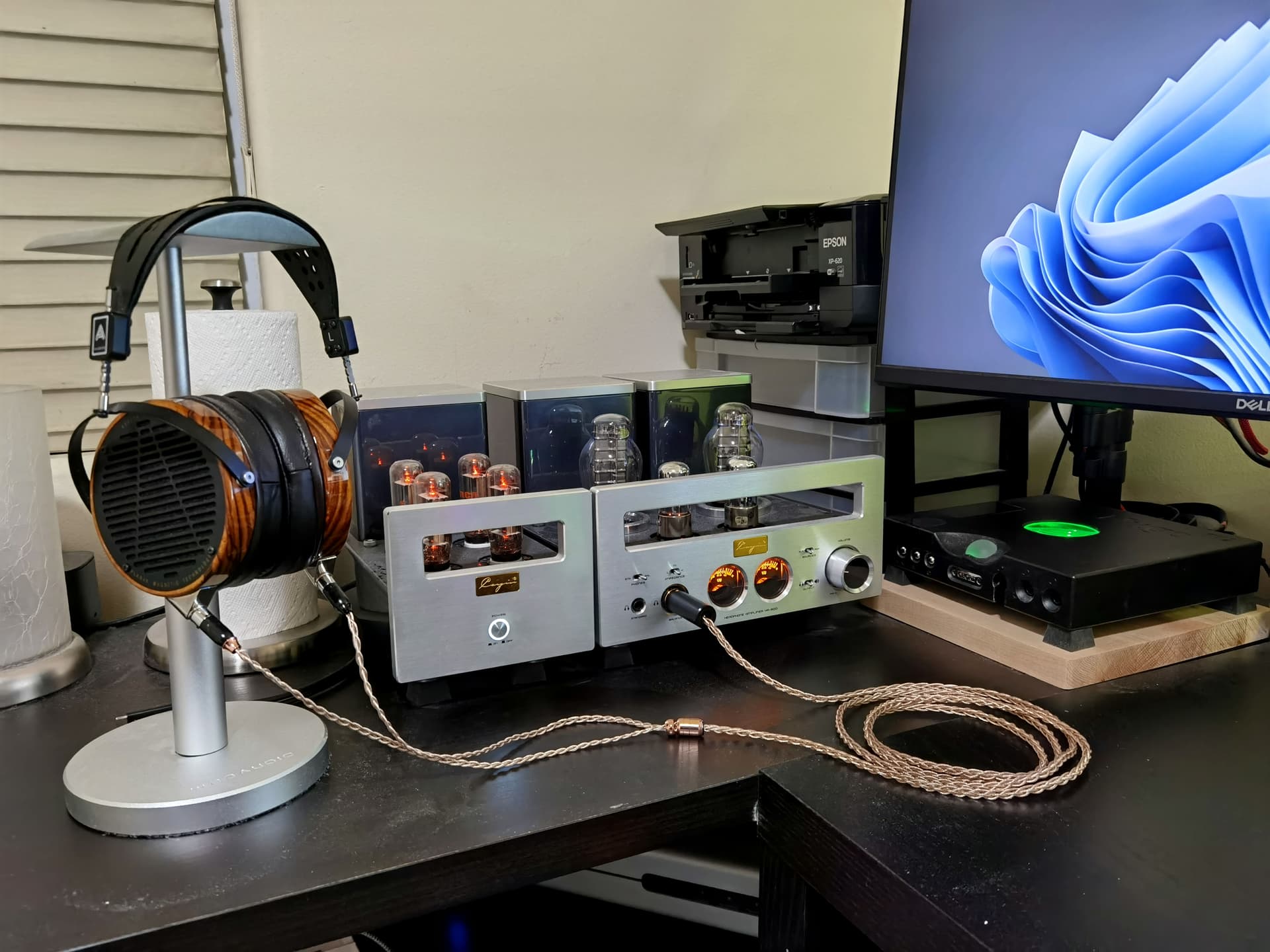 Went to my first canjam and it was lovely!! Had a great time talking with people in the Zmf room. Pics will be in order soon. Sadly I was only able to make it one day but I got some really cool goodies . I’ll post in the what’s in the box thread soon.

We know CanJam is an awesome event to see gear mixed and matched in near infinite combinations, but meeting and talking with fellow enthusiasts was the best.

I had even more fun sharing and learning from others.

The event was busy, but actually about just right. Worst case a person might have a 5 minute wait to hear something in particular. If a person was grooving on a particular set-up of interest, I’d listing to something else on the list and come back in a few. It all worked out.

I couldn’t resist a good price from Zack on a Verite Open. :7) What a freaking amazing headphone.

We will go live at 11am PST with @Frank I of Headphone Guru CanJam SoCal Sponsor and passionate headphone lover! Come hang out and chat with us and see what things from the show Frank loves!

This CanJam was AMAZING. Wow! Met so many nice people, got a good haul and heard a lot of impressive stuff.

YES!!! I must have invited like 10 people to come try my Aeolus on that amp. It’s crazy dynamic. One of the biggest highlights of the show for me. Plus with Rad-0 it’s just a separate dimension of fun.

I enjoyed the entire zmf exhibit. I would say the newest yet to be unreleased headphones are fire. The atrium was alright to good, had high expectations. Honestly the verite open, yea I spelled it wrong I think was really nice.

The one that got me was I preferred the stealth over the expanse and I had fairy high hopes for expanse.

Another one that was really shockingly good to me was 109 pro with mojo 2 @chord. That was crazy good and the 109 pro didn’t sound that good with other equipment. Did anyone else get the same notion?

Edit. Soekris was pretty fire too. They have a prototype headphone they were letting us test which was planar and it was actually really nice. Enjoyed those Manley amps as well but definitely way up there on price.

Would you mind unpacking why you preferred the Stealth to the Expanse? I’d love to hear why.

Sure thing, I would just like to throw out there that I only own two headphones. But I will do my best to put in proper terms.

Seems to me the bass is definitely more present and not exaggerated. Not a bassaholic but seems like the closed did it better and it was more palpable. Next I would say the stage or possibly imaging is more clearly split on two planes, so there was only a library to listen to songs internet was funky per usual. They had Diana Ross I’m coming out; bad selection or so you would think. Never heard that song really in detail but the opening of that prior to vocals actually has a really nifty instrument left right switch. On the Expanse it seemed alright on dissection, this was what I heard it first. But the Stealth did it perfect and seemed like I guess the slower attack made it easier to digest and enjoy.

If you listen to the track you can get what I mean about that first minute or so, the opening. I felt it had more separation and better decay. The expanse seemed to do it but it was almost like bursts, guessing that means it got faster attack.

Same with America Ventura highway and few other songs preferred it on the stealth better. I would say that maybe the expanse had a bigger stage or more around the head experience but not by much.

I mean these things maybe strictly typical of CB vs OB, but yea I knew the expanse is well measuring to the Harman target. But even with the bias in play of it being so excellent I didn’t get that.

Clarity wise I would say they are equal, not sure if I missed anything but feel free to add what else maybe needed.

The guy at DCA said he’s getting about a 50/50 response, some preferring the stealth over or vice versa. It’s probably just down to preference and type of song. Unfortunately wasn’t able to test any tracks I am familiar with a limited library

The atrium was alright to good, had high expectations. Honestly the verite open, yea I spelled it wrong I think was really nice.

Completely agree. I spent some extensive time listening to both the Atrium and Verite. I would still consider the Verite their flagship headphone.

The biggest surprise to me in their lineup was the new Auteur Classic. It simply punches WAY above its price point and extremely similar to the Atrium for a $1000 less.

If I were coming off of a Sennheiser HD 650, I’d leap at the Auteur Classic and have years of enjoyment.

The new one which I will just call carrera, said to be released in November I believe, was really nice. That one I am unsure on the price, but I believe it was the most expensive or going to be.

I heard the hd800s at soekris and it was the first time I enjoyed that headphone. Using their flagship dac. Don’t recall the amp

Again I see, same with 109 pro and mojo2 and my very own stereo setup or all audio, synergy seems to be the most crucial factor. The stealth did not sound as good on the mojo 2, but completely different with chord.

In the dca room I heard the tt2 with m scaler with most the headphones and then the dcs stack I believe or whatever was at the end closest to the exit and the chord definitely sounded better. I recall at Axpona and Florida audio fest that listening to tt2 and Dave with m scaler was really wack on stereo. Not implying it was horrible but it was alright. Yet I got a much better experience with the Dave better by itself via stereo

This is overall really bad news, meaning you really got to dig to find what will make the best sound. Which is really bad, especially considering you got up 2 or even 3 pieces of equipment prior to the headphones/speakers.

Also you can’t even judge something strictly by demo unless you feel you are getting equal experience across different equipment.

Having to change everything up with just a switch of headphones or speakers is insanely expensive.

I think again, as I am still learning. This is my second year in audio, just hit that mark and based on my comment and current experiences the expanse may be better than the stealth with different pairings.

May possibly want to retract my first response to you.

I tried them both on the tt2 and m scaler, with that set up I prefer stealth. But like I said when listening to mojo 2 on the chord table I greatly preferred the 109 pro over the stealth. Almost certain it was the stealth on the second mojo setup.

Heard the @64Audio Nio and U12T yesterday at Canjam SoCal 2022. Placed my order for a Nio today from Headphones.com. One of the best audio experiences I have ever heard. The sound is smooth yet detailed. The bass is intoxicating. The tuneability and comfort are a huge bonus. And American made? Sold. With the headphones.com free Fedex overnight shipping , I will be enjoying these amazing IEMs in a matter of hours!

Saw this on Head-fi and figured the team here would like to see it too: 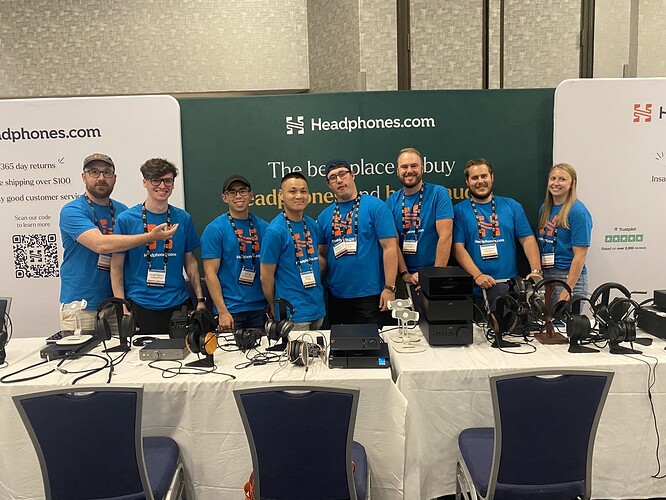 Crinacle took this shot I think